Tony Kusher’s AIDS-theme masterwork is back on Broadway after 25 years.

Twenty-five years after its Broadway debut, Tony Kushner’s AIDS-themed masterwork, Angels in America, has alighted once again on the Great White Way. This epic production, which transferred from London, stars Nathan Lane (The Birdcage, The Producers) and Andrew Garfield (The Amazing Spider-Man, Hacksaw Ridge) and is directed by Marianne Elliott.

The play, which opened on March 25 and runs for 8 weeks, consists of two related parts—Millennium Approaches (first performed in 1990) and Perestroika (from 1992). Because each part lasts nearly four hours, they’re performed as two separate shows, but the characters and actors are the same in both. Tickets are sold only as a bundled deal.

The play’s full title, Angels in America: A Gay Fantasia on National Themes, hints at the sweeping nature of Kushner’s storytelling, which weaves together AIDS, Reaganism, religion, immigration, climate change, historical figures (Roy Cohn and Ethel Rosenberg), a closeted married Mormon who comes out to his mom, his pill-popping wife, a drag queen, a gay couple and, yes, actual angels.

Arriving at the height of the AIDS epidemic—and several years before the advent of modern lifesaving HIV meds in 1996—the original production helped propel AIDS and LGBT issues into the mainstream. The show won a Pulitzer Prize and seven Tony Awards before inspiring countless productions across the globe, an Emmy-winning 2003 HBO miniseries and a 2018 oral history, The World Only Spins Forward (see sidebar below).

“The period I wrote the play about, AIDS was still primarily a disease of gay men in this country,” Kushner told POZ in an interview about the miniseries. “By the time the play was on Broadway, [AIDS] was becoming more a problem for women and much more for people of color. It was always in Africa, but we didn’t care as much about it. In some ways, [even if AIDS] feels more in control domestically, if you…consider all the orphans [across the world] who’ve lost both parents, you’re talking about consequences for hundreds of years to come.”

Check out the slideshow below to see the cast of the current Broadway revival.

In a sweeping oral history

Don’t despair if you can’t get to Broadway for the nearly nine-hour viewing of Angels in America—you can still experience this triumphant work. In 2003, HBO aired a two-part adaptation (Meryl Streep, Al Pacino, Mary-Louise Parker, Patrick Wilson) that’s available on many streaming services today. And this year, coinciding with the play’s return to Broadway 25 years after its premiere, is the publication of Isaac Butler and Dan Kois’s The World Only Spins Forward: The Ascent of Angels in America. Culled from nearly 250 interviews, the oral history captures not just the stories behind this modern classic but also U.S. history and culture from 1978 to the present. As The Angel declares at the end of Part One: “The Great Work begins!” 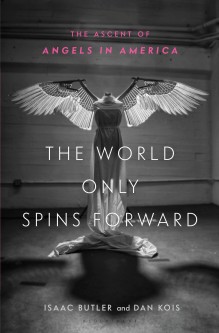 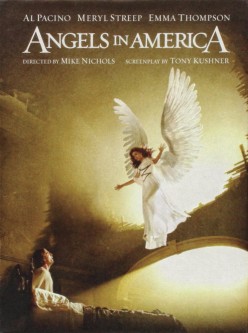