From the “Cell Count” exhibition Courtesy of Visual AIDS/Julia Gilard

The Art of Fighting HIV Criminalization

At a gallery, in print and during a Pride march

A recent art exhibit titled Cell Count in New York City included a bar of soap with the word criminal carved into it like a logo. What, you may ask, does this have to do with art? Well, the 2013 work by Camilo Godoy is made of soap, lavender, blood and HIV-positive semen. 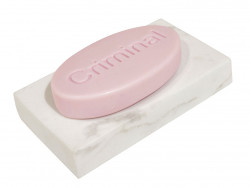 Aha! The piece, like all others included in the exhibit at La MaMa La Galleria, explores the topic of HIV criminalization. Godoy seems to be alluding to the stigmatizing phrases “clean” and “dirty” as they pertain to dating, sex and disclosure.

The show featured works in various media, such as drawings, photography, sculpture, quilts, performance and video, by 17 artists, including several collaborations. The most recent piece was commissioned for the show; the oldest ones—those by Barton Lidicé Beneš and Frank Green—date to the early ’90s. 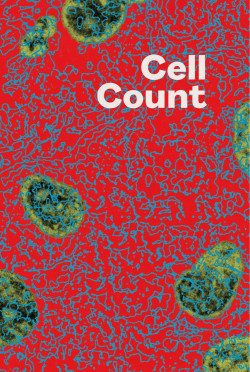 “In the last few years, there has been a lot of interest in the history of the AIDS epidemic,” says Kyle Croft, who curated the show with Asher Mones for Visual AIDS, which uses art to draw attention to the epidemic. “In Cell Count, Asher and I wanted to bring that sense of urgency out of the past tense and highlight contemporary political concerns around criminalization and surveillance.”

The resulting works, Croft says, “address themes such as the rendering of bodies as weapons; testing and medical surveillance as a form of control; the afterlife of slavery in medical and sexual cultures; and the effects of incarceration and stigmatization on people living with HIV.”

The show closed this summer, but you can still see the art. Slide shows are posted on VisualAIDS.org and POZ.com, and Visual AIDS offers a 116-page Cell Count catalog that includes essays and reports from activists. Click here for our Q&A with Esther McGowan, the executive director of Visual AIDS.

Cell Count curators collaborated with artist Avram Finkelstein and the Visual AIDS staff to print a four-page broadside about HIV criminalization. The crew joined the Sero Project and the Center for HIV Law & Policy for Manhattan’s Pride march, during which they handed out thousands of copies, taking the message to the masses.