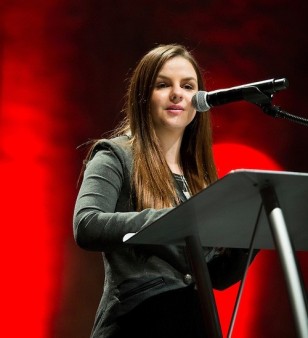 My name is Ashley Murphy and I live in Ajax, Ontario. I am 16 years old and have been living with AIDS all of my life. I acquired it from my late birth mother who had an addiction to crack and alcohol. She smoked crack even while in labor before going to the hospital—such was her addiction. She loved me, but her addiction made it impossible for her to care for a child, and as a result my HIV progressed to AIDS before I was 6 weeks old.

I was taken to SickKids Hospital in Toronto with respiratory distress and the X-ray showed that I had Pneumocystis pneumonia (PCP) in all four lobes of my lungs. That was the first clue that I likely had AIDS. The doctors started me on AZT and antibiotics to give me a fighting chance even before the tests came back confirming I was HIV positive. My viral load was more than 1 million. The SickKids Infectious Disease team put me into a medically induced coma and on a respirator to give my body a chance to heal and the medicine time to work against the virus. I weighed 3 pounds, 10 ounces, but 3 pounds of that was attitude. I fought to live and they fought to save me.

Just before I turned 6 months old I was removed from the respirator and placed with my foster parents. I weighed only 8 pounds, 3 ounces. My skin was translucent. Most of my hair had fallen out. My nails had stopped growing and I was very frail. Children’s Aid told my foster parents that I only had a few weeks to live and was being placed with them for palliative care.

Clearly, I had other plans.

My foster parents adopted me and never gave up on me. They treated me as if I was a healthy baby and had high hopes for me. I took my medications faithfully even though they tasted really awful.

I was diagnosed with mild cerebral palsy, learning disabilities and mild fetal alcohol syndrome. These were just words to my parents, who still pushed me to be my best. I learned to talk, crawl and walk at a much later age than healthy babies, and once I was mobile and verbal there was nothing that was going to hold me back.

When I was 5 years old I weighed only 23 pounds, which is typically a healthy weight for a 1-year-old, and I needed a feeding tube. My viral load was high and my CD4 count was very low. Once the feeding tube was put in through my abdominal wall and I started receiving tube feedings at night I started to grow at a more rapid pace. I was still much smaller than my peers but the gap was closing. Nonetheless, I had to be disconnected from the tube in the daytime because I was very active and pulled it out a couple of times, which hurt a lot and caused me to bleed as well. When I was about 9 I had the tube removed as my weight stabilized.

Since then, I have had pneumonia a few more times and the flu has really knocked me out, but overall I am healthy.

I am part of a large family of 10 kids. Eight of us have special needs of varying degrees. I guess that is part of the reason that I grew up confident enough to live openly with my condition. We all had some disease or disability. Most of us have lost one or both of our birth parents and most had drug and alcohol exposure in utero. Most of us were also abused by people who should have cherished us. These similarities bonded all of us in a way that many families don’t experience.

I have a big group of siblings backing me up should anyone ever try to bully me. We may be weak individually but as a whole, that’s a lot of wheelchairs, leg braces, arms and legs you will have to wade through to get to any one of us.  There is safety in numbers so I felt emboldened.

The drug and alcohol exposure combined with my rough start in life caused me to have learning disabilities, but with hard work I made the honor roll. I was given a prestigious award from the school board for my hard work, good marks, Christian fellowship and community volunteerism. I volunteer for several charities, many of which are related to AIDS and some that are community or children’s charities. I was also chosen by my teacher and peers to be an MC for my eighth grade graduation and voted student council vice president in my elementary school. This was all while living openly with HIV and being an outspoken advocate. I am fortunate to live in a community and attend a school where I am well liked and supported, instead of being bullied or ostracized over my status. I know how lucky I am to be accepted and that is why I speak out. We ALL deserve to be accepted and respected for who we are.

I started high school in 2012 and I am working toward going to college or university. I am interested in the arts and in human rights and civil rights.

Recently I spoke in front of 16,500 youth at We Day, an international youth empowerment movement, telling my story and helping more kids like me.

I went to Kenya this summer to help build schools with Free the Children and I spoke at a small rural hospital with HIV/AIDS patients. I learned a lot from them and they learned from me. They had no idea that people in Canada had HIV, much less a young teenager who talks openly about it. I hope to lessen the stigma associated with AIDS through my volunteer work.

I sing in a rock band, have acted in musicals and recently did a television documentary about growing up with AIDS. I have spoken at medical conferences in front of scientists and researchers and at smaller venues, educating others about HIV and correcting misconceptions.

HIV is on the rise in Canada in youth ages 15 to 29, not just in homosexual youth, but also in heterosexual youth. Young people have a sense that it won’t happen to them. They think that they don’t know anyone who has AIDS, so how can they catch it? Well, that is a myth. There are all kinds of people out there who don’t even know they have HIV and who have no interest in being tested. My birth mother knew she had been with a man who had AIDS but never got tested herself until it was a medical emergency and I was dying.

You need to protect yourself. Talk about HIV/AIDS. Bring it out in the open. Become educated about it and know that this health crisis is far from over. Ignorance is the greatest threat to humanity and education is the key to an AIDS-free generation. There should be no further children born HIV positive. It is within our grasp to make that a reality.

Just last October, a young 22-year-old woman from Parry Sound, Ontario, named Alisha Thompson died from an AIDS-related illness. She got HIV by having unprotected sex with a man she thought she could trust. She was wrong. She got pregnant and delivered a healthy baby girl, but the stigma of having AIDS was too much for her and she fell into a depression and refused to take her medicine. Within two years of being diagnosed with HIV, this vibrant young woman with strawberry blond hair was dead. Her death was so unnecessary. It is cases like this that make me more convinced that I am on the right path. We need to speak up and reach young people. We need young people to know that you must get tested and you must use a condom. The fact that Alisha felt fear and shame for being HIV positive needs to change. No one should ever be so ashamed of their own health that they would rather die than take medicine and live with the disease.

There are entire generations of children being raised by grandmothers in Africa. Let this generation be the last generation we allow that to happen to.

I will never stop trying to win the fight against HIV. I don’t let AIDS interfere with my life. I take my medicine and I don’t worry about it other than that. I have faith that I will grow up and live a full life.

Many of the kids that I have grown up with in the HIV clinic have gone to college, gotten married and had children of their own. Those babies all test negative for HIV. With diligence, testing, condom use and medication we can stop the spread of HIV in this generation. One day I hope to have a family of my own, and will ensure that my own children are born free of this disease.

My goal is to remove the stigma of living with HIV and to educate others so that people do not have to feel ashamed or live in fear of exposure or in isolation from others. I will keep talking about it and putting myself out there as long as it takes. I want to be the voice for those who are too afraid to speak up. I also want to let people know that you should never be afraid of being yourself. And if there are people who react negatively, do not focus on that but rather the positive. Because there should never be another Alisha. Not now, not ever.

What is your greatest achievement?
Surviving and fighting with everything I have in me

What is your greatest regret?
I have no regrets. Regrets are useless. Everything you experience is worthwhile.

What keeps you up at night?
Worrying about the children in Sikirar, Kenya

If you could change one thing about living with HIV, what would it be?
Medication side effects

What is the best advice you ever received?
To thine own self be true.

What person in the HIV/AIDS community do you most admire?
Magic Johnson and a close relative who does not live openly but lives with grace and positivity

What drives you to do what you do?
A need for fairness and equality for all. I dislike discrimination of any kind.

What is your motto?
Let’s DO this!

If you had to evacuate your house immediately, what is the one thing you would grab on the way out?
Besides my family and dog? Photos and precious belongings. But really, I can live without everything but my family.

If you could be any animal, what would you be? And why?
Hmmmmm. Probably a small dog because people like them and care for them and they don’t catch SIV—only cats do.