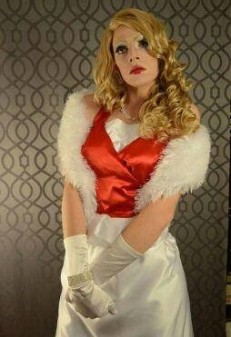 My HIV story honestly starts when I was 24 in Portland, Oregon. It was there that I first met people living with the disease. I made friendships with HIV-positive peers and I did my first AIDS walk to help raise awareness and funding for the Cascade AIDS Project. I have always been a charitable person with a big heart. Seeing how profoundly HIV was still impacting the LGBT community, I was happy to get involved and make a change.

A month later I contracted the virus from a casual sex partner. Even though I insisted on “playing safe,” he did not respect my wishes. He was a personal trainer who outweighed me. I was unable to do much about it—I was honestly afraid to say anything. He infected me with the virus. He believed he was negative at the time and I don’t feel as though what he did was intentional.

After our encounter, I was tested twice right away. Both times I tested negative. I thought I was in the clear and was thankful until I flew back home to visit my grandfather who was passing away. During this stressful time, I became weak as the virus had had time to take hold. I was hospitalized for a week in the cancer ward. My lymph nodes were swollen all over my body and were very painful. After a week I was diagnosed with HIV.

Being an advocate prior to my infection helped me skip the “beat myself up” part. I just moved directly into advocacy and raising awareness. I was put on antiretroviral treatment and quickly achieved an undetectable viral load range and my CD4s are rising steadily.

After the meds started working, I went back to work, which is where I met my husband. I disclosed my status to him at the end of our first date and he was incredibly accepting and supportive. We have fallen madly in love, entered into a civil union and adopted our daughter along the way. She’s 4 now and brings so much love and joy to our world. She’s our miracle child.

My story is to tell anyone living with the virus that it is not the end but the beginning of a new chapter. They can have it all: life, love, health and happiness. They should never lower themselves because they are positive. Life is about living and living to the fullest.

What is your greatest achievement?
Not letting HIV govern my life. Being a voice for those who were silenced by the virus.

What is your greatest regret?
I don’t have one. Everything in my past is the foundation of who I am today.

What keeps you up at night?
Planning for the future

If you could change one thing about living with HIV, what would it be?
The stigma associated with it. I feel stigma is the most difficult thing to overcome. I would abolish BIG stigma.

What is the best advice you ever received?
To take deep breaths. Yoga changed my life. I also found yoga after my HIV diagnosis. Yoga is about breathing more than stretching. So don’t be afraid!

What person in the HIV/AIDS community do you most admire?
Pick just one? That’s hard. Jack Mackenroth and Mike Ruiz. Both humble me so much as we follow each other via Twitter.

What drives you to do what you do?
Rising infection statistics. My daughter. The future.

What is your motto?
Good things come to those that work their butt off and never give up!

If you had to evacuate your house immediately, what is the one thing you would grab on the way out?
My life forms (My daughter, pets, plants)