This is according to the world’s first study to conduct an analysis of PrEP’s apparent effect on the HIV rate on a public-health level.

After a rapid scale-up of the distribution of Truvada (tenofovir disoproxil fumarate/emtricitabine) as pre-exposure prophylaxis (PrEP) among men who have sex with men (MSM) in New South Wales, the diagnosis rate of recently contracted HIV among MSM dropped by 32 percent in the Australian state, which includes Sydney.

This dramatic shift occurred after the province’s HIV diagnosis rate had held essentially steady during the preceding years. The recent period researchers factored into their analysis saw only relatively modest increases in the HIV population’s viral suppression rate. So treatment as prevention is not likely the primary driver of the considerable change in the HIV rate. (If HIV is fully suppressed with antiretroviral (ARV) treatment it effectively cannot transmit.)

“Really, the main thing that changed by far during this period was PrEP,” said Andrew Grulich, PhD, an HIV epidemiologist at the Kirby Institute at the University of New South Wales in Sydney, who presented findings from the study at the 2018 Conference on Retroviruses and Opportunistic Infections (CROI) in Boston. 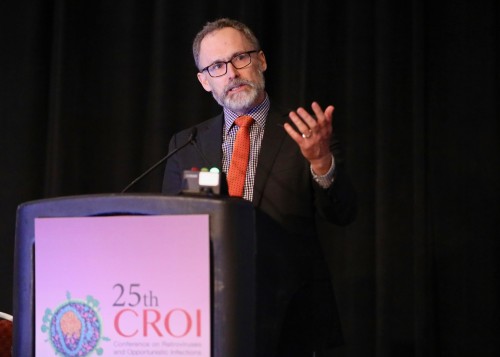 Seeking to conduct the world’s first analysis of PrEP’s wide-scale effect on a population’s HIV rate, researchers secured funding from the New South Wales Ministry of Health to start 3,700 people on PrEP beginning in March 2016. The target population included adults who were at a high and ongoing risk for HIV according to local guidelines. Those who had compromised kidney function (an eGFR test result below 60) were excluded.

Those receiving PrEP were scheduled to receive a baseline-screening visit, a one-month follow-up visit and screening visits every three months thereafter.

Demand for PrEP proved considerable: 3,700 people started PrEP within eight months of the study’s launch. Consequently, the investigators behind the study were able to convince the local government to give them greater financial backing; by the end of 12 months, 7,621 individuals had received PrEP.

Eighty percent of new HIV cases are among MSM in New South Wales, so PrEP was well positioned to make a major dent in the state’s HIV rate given its rapid uptake among this population.

A total of 3,602 people (97.4 percent) received at least one follow-up HIV test during the study. This population was included in one of the key parts of the final analysis.

The study authors looked at a so-called medication possession ratio over 12 months among the individuals receiving PrEP, specifically the estimated percentage of a year’s supply of Truvada that individuals obtained during their first year after initially receiving the drug. The median possession ratio was 97.8 percent, meaning that more than half of those receiving Truvada received almost an entire year’s worth. Seventy percent of the study population received 80 percent of a 12-month supply of the drug, while 14 percent received 50 to 79 percent, 13 percent received 10 to 49 percent and 3 percent received less than 10 percent of a year’s supply within 12 months of first receiving PrEP.

During a cumulative 3,927 years of follow-up among those 3,602 people, two of them tested positive for HIV. One individual was given PrEP but never started it, and the other took no Truvada for months before contracting the virus.

Consequently, the researchers concluded that the study population contracted HIV at the very low rate of five cases per 100,000 cumulative years of life.

The investigators looked at the HIV rate among MSM in New South Wales according to state surveillance from March 2015 through February 2016, the 12-month period before the study began recruiting people, and compared that rate to the one seen during the 12-month period after the study enrolled its first 3,700 people, November 2016 through October 2017.

By the end of this time, the study had recruited 7,621 to start on PrEP.

During the initial 12-month period and the latter 12-month period, MSM in New South Wales saw a respective 149 and 102 diagnoses of HIV that were deemed to be infections MSM had contracted within 12 months. These two periods saw a respective 295 and 211 total HIV diagnoses among MSM, including both recent and more long-term infections. That meant that among MSM in this province, diagnoses of recent HIV infections dropped by 32 percent and all HIV diagnoses fell by 25 percent.