The chair of Positive Women’s Network USA reflects on self-empowerment for all women with HIV/AIDS.

Twitter
Facebook
Pinterest
Tumblr
Email
Advertisement
Barb Cardell is the chair of the board of directors of the Positive Women’s Network United States of America (PWN-USA), a national membership group of women living with HIV/AIDS. Founded in 2008, PWN-USA builds leadership skills and advocates for social justice and human rights.

Based in Boulder, Colorado, Cardell has been HIV positive since 1991. She became a PWN-USA member in 2009. She was appointed to the Colorado Coalition for HIV Care and Prevention in 2011 and was elected vice chair of the coalition in 2012, the same year she started Colorado’s PWN-USA regional chapter.

In addition to her role at PWN-USA, she serves on the steering committee of the U.S. People Living with HIV Caucus, a group of organizations, networks, client groups and individuals with HIV advocating for people living with the virus.

In this POZ Q&A, Cardell shares her personal journey of being diagnosed and living with HIV, her experience with stigma and her belief in self-empowerment.

How does PWN-USA use self-empowerment to help women?
When we talk about HIV, it’s a self-perpetuating loop. Look at some of the social drivers that have put women at risk of HIV—poverty, intimate partner violence, low self-esteem. When we become HIV positive, all these things that put us at risk also disempower us.

Self-empowerment is about acknowledging who we are, how we got here and how coming together can move us forward in a way that can help not just ourselves, but also our sisters living with HIV and our sisters at risk for HIV.

As women speak for ourselves and we’re heard, we find that so much can change in our lives. We realize that perhaps abusive situations and a lack of quality health care are no longer things we’re willing to live with.

In 2015, we’ll continue to organize around the annual National Women and Girls HIV/AIDS Awareness Day, which is March 10. We’re also partnering with the Sero Project and the HIV Is Not a Crime conference to organize regional meetings to fight HIV criminalization laws.

In many ways, what I’ve learned about self-empowerment from PWN-USA—looking at the root causes, how people get to being at risk for HIV and also what affects their lives after they’re living with HIV—has informed not just my advocacy but other women who have come to the table in Colorado, and has then informed Colorado strategies.

Tell us about your stigma survey.
I’m part of the Colorado Organizations Responding to AIDS, a statewide group of organizations and advocates that forms a common message on advocacy for and by people living with HIV. Three years ago we created a stigma survey and a campaign called “Compassion: Ending the Stigma.”

Every year we conduct the survey online. It’s an attempt to measure how educated people are around HIV issues. We have a comments section. Watching the comments shift as people’s knowledge base shifts has been fascinating.

The most recent was a community-based survey. We worked with Anne Stangl [of the International Center for Research on Women] to create it, so it’s based on what they do in Africa, as well as the Stigma Index from Laurel Sprague [of the Sero Project].

In Colorado, people are not saying that they feel like men who have sex with men [MSM] are socially judged—whether that’s true or not, that’s the perception. However, when you ask that question about sex workers, [we see that they are] very strongly judged. People who inject drugs are also very strongly judged.

In some ways, messaging around MSM has been effective. In other ways, we need to shift messaging on other key populations who are at risk of or are living with HIV.

Data from the latest survey will be used to inform the Colorado HIV/AIDS Strategy, which we wrote with a partnership between the Colorado Department of Public Health and Environment, AIDS service organizations and community providers, as well as people living with HIV.

How can we fight against stigma?
There’s no easy solution. At PWN-USA, we see stigma as one of the root causes of the continuation of the HIV epidemic. It comes from ignorance and fear. Until we make sure every person in the United States understands how HIV is transmitted, and how it is not, we will continue to have stigma.

PWN-USA shares stories of women who are strong and are advocates and are out about their HIV status, so women who are not out can see that there are other women who can do this and then begin to believe that they can. We work at identifying and addressing the fear, as well as sharing and breaking down the isolation for women. 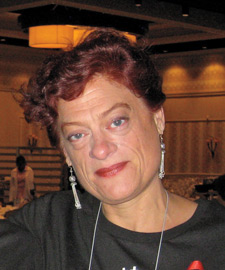 Please share your HIV journey with us.
I was infected in 1991 and lived two more years with HIV before I got tested. Some of my gay friends needed to get tested and weren’t, so I told them we were going out for drinks and dragged them to get tested with me.

It was dumbass luck that I found out I was HIV positive. The friends I tested with were all HIV negative. I’d been a buddy for people who were living with HIV and dying of AIDS-related illnesses since the late ’80s, so it wasn’t that I didn’t think HIV could happen to people like me; based on all the assessments, it wasn’t me.

The pernicious thing about categorizing groups of people who are at risk of HIV is that there are people who do not fit those categories. We need to focus on these high-risk groups, but we also need to realize there are people like me who fall through the cracks.

My husband and I had been married for about six months when I found out I was HIV positive. I was 29, and the doctors told me I had five years to live. I called him and said, “I’m HIV positive and I think we should get divorced, because I don’t want you to have to go through me getting sick and dying.”

What keeps you motivated?
I do a lot of public speaking in schools. I have letters from kids who knew somebody with HIV and never knew how to talk to them but felt like they could after I had presented. Or I talked to somebody HIV positive and I helped them feel like they were a little less alone.

It’s so easy to get frustrated when you don’t see immediate results, but we’re all in this together and we all can make the world a better place. I love being in sisterhood with my HIV-positive sisters and our allies.