The naked truth is that major cuts to federal AIDS budgets still loom. 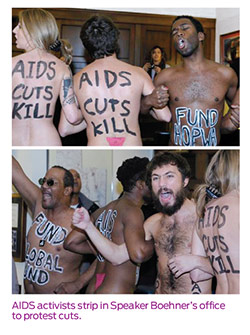 Hold onto your hats: Congress and President Obama may have averted the fiscal cliff by making a deal on taxation, but mandatory budget cuts (a.k.a., sequestration) still threaten federal HIV/AIDS programs if another agreement isn’t reached by the end of March.

Last November, right before World AIDS Day, seven protesters from Queerocracy and ACT UP New York and Philadelphia stripped naked in the office of U.S. House Speaker John Boehner to call attention to these cuts. Slogans such as “AIDS Cuts Kill” and “Fund PEPFAR” were painted on their bodies. Three women were arrested at the protest, but all of the “naked seven” are facing indecent exposure charges. Activists say that the proposed spending cuts—8.2 percent in discretionary programs—will result in at least 620,000 otherwise preventable deaths from HIV; in addition, global health programs will lose $689 million and domestic AIDS programs will lose $538 million in 2013. This last figure, according to the AIDS Institute, includes a cut of $64 million from the CDC’s HIV/AIDS prevention budget and $196 million from federal Ryan White funds. This, in turn, translates to a $77 million reduction in AIDS Drug Assistance Programs, which means 9,400 people would no longer get their HIV meds.

“We stripped naked in Boehner’s office in November to expose the detrimental effect this would have on their constituents,” says Queerocracy member Cassidy Gardner, who was one of the arrested women. “We did what we did because lives are at stake, but more needs to be done as we continue to face the potential of these cuts.”