Hold Your Horses! Can Barebacking Be Safer Sex?

Can barebacking be safer sex? 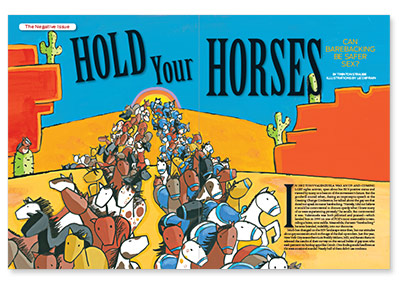 In 1997, Tony Valenzuela was an up-and-coming LGBT rights activist, open about his HIV-positive status and viewed by many as a beacon of the movement’s future. But the goodwill soured when, during an impromptu speech at the Creating Change Conference, he talked about the gay sex that dared not speak its name: barebacking. “Naively, I did not believe it would be controversial to discuss openly what I knew many of us were experiencing privately,” he recalls. But controversial it was. Valenzuela was both pilloried and praised—which landed him in 1999 on one of POZ’s most memorable covers, riding a horse, sans saddle. Meanwhile, the term “barebacking” became branded, indelibly, into our discourse.

Much has changed on the HIV landscape since then, but our attitudes about gay sex remain stuck in the age of the dial-up modem. Just this year, New York City researchers Luis Freddy Molano, MD, and Renato Barucco released the results of their survey on the sexual habits of gay men who seek partners via hookup apps like Grindr. One finding made headlines as if it were a national scandal: Nearly half of them didn’t use condoms.

The ensuing coverage and commentary were framed in disapproval, shame and condemnation. So let’s unclutch the pearls and start a rational conversation about barebacking in 2013, specifically in terms of risk for HIV-negative men.

Many HIV prevention experts tend to define barebacking as intentional condomless sex when a risk of HIV is present. This differentiates it from, say, condomless sex between two positive men with undetectable viral loads. Which raises an interesting point: Not every act of skin-on-skin sex is unsafe.

“Let’s stop calling it barebacking,” suggests Valenzuela, who today, in addition to his gay health advocacy work, is the executive director of the Lambda Literary Foundation. “While sex without a condom can be a fetish for some, for most, it’s simply one of the ways they have sex some of the time.”

Although HIV risk is present without ejaculation inside the anus, it is much greater with. “Men are engaging in a variety of behaviors that might be risk reduction strategies,” Rosenberger says. “And while I’m not promoting ‘barebacking,’ if there’s no risk of disease transmission”—if both men are negative and monogamous, for example—“then these men shouldn’t be included when we talk about men most at risk for HIV. We need to rethink how we calculate risk.”

Thanks to other researchers such as Alex Carballo-Diéguez, PhD, and Perry Halkitis, PhD, we’re amassing a body of knowledge on gay sexual practices. We know gay men use condoms more than straight guys (who average 25 to 30 percent condom usage). We know that gay guys understand how HIV is transmitted. We know that barebacking, like alcohol and drug use, can offer an escape from racism, homophobia, loneliness, anxiety and depression—and that it can also offer a spiritual and intimate bond, not to mention a thrilling gage of manhood. We know that recent increases in syphilis and gonorrhea rates indicate an uptick in condomless sex. We know that once a couple decide to ditch condoms, they’re less likely to start using them again in the relationship and that they’re more likely to bareback with other partners. We know that condomless sex is more common in Internet hookups, and that it’s more likely in the presence of drug and alcohol use (but don’t place all the blame on Grindr or Manhunt or meth, Halkitis says, because condomless sex will go on without them). We know that positive guys are more likely to bareback—and to do it with other poz men. And we know that African-American MSM and younger MSM report wearing condoms more often than their older white contemporaries.

But wait—we also know that, despite the overall stability of the U.S. epidemic in recent years, HIV rates among young MSM ages 13 to 24 are increasing about 22 percent, according to the Centers for Disease Control and Prevention (CDC). Clearly, these boys are lying about safer sex, right?

Not necessarily, explains Jonathan Mermin, MD, MPH, director of the Division of HIV/AIDS Prevention at the CDC. “If you only look at incidence—the number of new infections per year—you sometimes miss the bigger picture, which is that prevalence—the number of people living with HIV—is going up,” he says. In fact, it has gone up 60 percent in the past 15 years. That means there are more people today living with HIV. The numbers are pronounced in some communities—such as black MSM—and as a result those guys have a much higher chance of coming in contact with someone who is positive, even if they don’t have a lot of sexual partners. Mathematical modeling using a conservative 2.39 percent HIV incidence suggests that half of all gay men who are 22 years old today will be HIV positive by the time they’re 50. Young black MSM face even worse odds.

In other words, a spike in the number of new HIV cases can’t always be directly blamed on a spike in condomless sex.

What’s more, Mermin points out, 60 percent of HIV-positive people younger than 24 don’t know their status. “If you don’t know your status, you’re less likely to take precautions to protect others and less likely to access treatment, which will not only help you live longer but also reduce your chance of transmission [by lowering the amount of virus in your body fluids].”

Jeff Huyett is a nurse practitioner at Callen-Lorde Community Health Center who has been working with gay men since the 1980s. When his clients disclose that they’re going bare, a conversation like this often unfolds: “My boyfriend said he was negative so we decided not to use rubbers.” “When did he last test, and when was his last sexual partner?” “Oh, I didn’t ask that, but I trust him. He’s awesome.” “Well, studies show that most guys are not monogamous in the long term, and if he’s barebacking with you, chances are he has barebacked with others. This person could have HIV.”

It has been estimated that 68 percent of new MSM infections occur within relationships. What’s more, 55 percent of young gay couples ditch condoms before three months—46 percent of them do so without first discussing it. In a cruel twist, it turns out that being in a relationship is a risk for HIV. Which makes sense because, as the late POZ journalist Stephen Gendin wrote back in 1997: “The connection feels closer and more intimate. The sharing of cum on the physical level heightens the sense of sharing on the emotional and spiritual planes.” And what’s wrong with that? Gay men are just as entitled to fully realized sexuality as any other human beings.

Indeed, for some couples who know their status and aren’t fooling around, Huyett says, condomless sex makes sense. He tells such guys to first get tested for herpes 1 and 2, syphilis, and hepatitis A, B and C. And to get screened in three orifices—the throat, penis and anus—for chlamydia and gonorrhea. The same goes for HIV-positive couples.

“In the old days before AIDS,” Huyett recalls, “if you were out fooling around, you went to the health department every three months and got tested and treated [for sexually transmitted infections]. When HIV came around, we started using condoms, and that whole thing went to the wayside.”

Maybe it’s time to revisit this habit. Vigilance against STIs, many of which can go unnoticed, is a vital part of HIV prevention. STIs increase viral load, which makes positive men more infectious, and they increase inflammation, which makes negative men more susceptible.

Condoms help protect against these other STIs, so why not just double down on condom messaging? For starters, explains Susan Buchbinder, MD, of the University of California at San Francisco, such behavioral interventions have increased condom use by only about 20 percent. Much hope has been placed on biomedical prevention, a.k.a. chemoprophylaxis, which allows for condom-free intimacy with less HIV risk. Post-exposure prophylaxis and pre-exposure prophylaxis, PEP and PrEP, are when HIV-negative people take meds to prevent infection; and treatment as prevention, TasP, refers to the idea that positive people on regimens have undetectable viral loads and are unlikely to pass the virus.

These show great promise. For example, men who have trouble using condoms in the heat of the moment might be more compelled to take a daily pill during the sober light of day. But the cold reality is that PEP isn’t easy to attain, PrEP (at nearly $1,000 a month) isn’t affordable for most, and only about a quarter of HIV-positive Americans are virally suppressed.

To reduce their risks without condoms, some guys try serosorting (having sex only with people of your HIV status) and seropositioning (topping if you’re negative; bottoming if you’re positive). But seroadaptation tactics aren’t foolproof, and like chemoprophylaxis, they don’t do a lick of good against other STIs.

Condom use “is never going to be 100 percent,” says Michael Weinstein, president of the AIDS Healthcare Foundation. “But if we don’t promote it, it’s going to go down.” Likewise, if we don’t promote sex education and more frequent HIV testing, we’ll see more virus. Halkitis notes, for example, that many young MSM today don’t fully understand the “window period” of infection (when you might test negative and yet be highly contagious). “We’ve sort of abandoned the education,” he says, “and this new generation needs it.”

Queer empowerment advocate Jeton Ademaj agrees. Serosorting failed to keep him negative, and today he supports chemoprophylaxis as a way to enjoy “natural sex” with lowered HIV risk. In addition to promoting testing and education, Ademaj says, we also must focus on linkage to care and adherence to meds, plus the related issues that prevent them. “There needs to be a bold effort to sell these things to the community, because as a total package, we now have the tools to end HIV.”

In a country that allows abstinence-only education and “no-homo-promo” laws, in a culture that often views sex as a sin deserving of disease, and in an LGBT community that’s more focused on marriage equality and employment discrimination than on HIV, it’s imperative that we speak truthfully about sexual health. We need a public dialogue that’s more nuanced than “wear a condom every time.”

Now, let’s get everyone else to join the conversation.