Bronx-born Ronald Johnson started his HIV career as a volunteer at GMHC at the very beginning of the epidemic in 1984.

“I started my HIV career as a volunteer at GMHC at the very beginning of the epidemic in 1984,” says Bronx-born Ronald Johnson. Active in social issues, Johnson first worked with the YMCA, in its national youth development program. He was working for a New York City settlement house when he started volunteering for GMHC, which prompted an invitation to become a board member. Johnson then went on to lead the Minority Task Force on AIDS as executive director.

This was all before his own diagnosis. That early in the AIDS crisis, neither he nor his partner at the time had yet been tested. “Then, in 1989, my partner got ill, and he tested positive, so I got tested as well. That’s when I tested positive,” Johnson says, “and I figured I only had a few years left to live.”

In the years since that frightening finding, Johnson has lived long enough to see the epidemic turn around with the advent of antiretrovirals. Guided by his passion for social issues, he served as New York City’s coordinator for AIDS policy, then as GMHC’s associate executive director. He oversaw the policy activities of AIDS Action, which in 2011 merged with the National AIDS Fund to become AIDS United. As its policy leader, Johnson helped AIDS United grow into one of the country’s preeminent HIV organizations. He retired from AIDS United in 2017.

Now 73 years old, he lives with his current partner in Silver Springs, Maryland. “We’ve been together for 20 years, married for five,” he says. “We’ll celebrate six years in October.” Although retired, Johnson keeps active as a consultant, offering his expertise on HIV and aging. 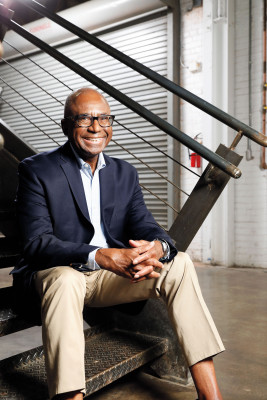 “Among the many challenges of people like me getting older with HIV are the issues of comorbidities,” Johnson says. “We know there is an interaction between HIV and aging, so getting screened for conditions that are common to aging is very important.” Johnson mentions that he’s taking more medications for non-HIV conditions than to treat his HIV. “We who are going through that need to make sure that our health care providers and our pharmacists are aware, because these drug interactions can be difficult to detect, especially if no one is connecting the dots.”

Johnson added that mental health among older people living with HIV is another challenge. “I would like issues of loneliness, social isolation, trauma, depression and other mental health issues to be included with nutrition, housing and other social services needed for people living with HIV.” For him, safe and stable housing for people with HIV has been the number one nonmedical issue since the beginning of the epidemic.

In his spare time, Johnson chairs the steering committee for the U.S. People Living with HIV Caucus and is active with other networks of people with HIV. He is also the president of Point Source Youth, a national organization focused on youth homelessness, particularly in the LGBTQ community.

“Sometimes when my phone rings, I think, Wait a minute, I’m supposed to be retired!” Johnson says. “But we’ve always known that HIV was more than a medical condition, that it was a ‘social disease.’ The HIV epidemic exists in the context of inequalities of health care in general, inequalities of income and economics, rights and racial injustices, so it’s important to continue working on these issues.”