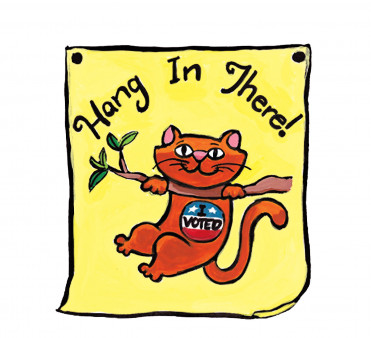 We must fight through our collective trauma to begin the process of renewal.

I am weary. My all-consuming rage is exhaust­ing me. I feel sick. It is a twisted knot of dread in my gut, and it wakes me up each morning with apprehension about the latest tweet or the removal of another brick from the wall of our democracy so it can be repurposed somewhere along the southern border.

I never knew there are so many people willing to toss others aside, who would seek out revenge for their own lack of opportunity, who would stretch out their arms and point their finger like a weapon toward the other among us and then pronounce him or her, that wretched person over there, the reason for the ills they face in this world.

I am HIV positive, and I am gay, and I am an ally of the many marginalized people who are touched by this epidemic—and I am deeply, profoundly afraid. 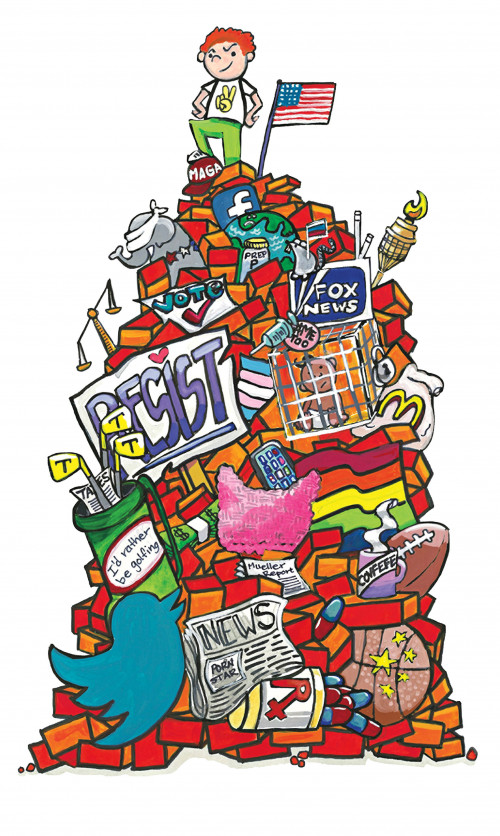 The latest revelations barrel forward at such a dizzying pace that whatever words I am typing now will surely be dated, perhaps quaint, by the time you read this essay.

Chronicling my current outrage feels like burying a time capsule that will be unearthed almost immediately afterward. You are living in the year 2020. Allow me to share with you, then, what we are facing as I write this in late 2019, as if examining an ancient artifact.

Parents with HIV seeking refuge have been separated from their children. The Supreme Court is ruling on whether employees can be fired for being LGBTQ. Our government continues to dismantle our public health care system. The president has suggested that border patrol agents slow down incoming Mexicans by shooting them in the legs. His personal lawyer is babbling on the nightly news.

It is a legion of horrors. We want to look away, to seek precious solace in the comfort of a loved one or by binge-watching our favorite show, but to be distracted is to miss news of the latest mass shooting or the murder of another transgender woman.

As you read this, you know so much more than I do. Was he impeached? Will that matter if his policies are intact? I only know, as I sit here writing this, that the trauma this administration has inflicted will remain long after my time and long after yours.

The administration’s stance on immigration alone is terrifying for anyone living with HIV. A proclamation has just been signed that bars legal immigrants unless they prove they have health insurance or the means to pay for it within 30 days of entering the country.

There’s more. The “public charge” rule will reject any potential citizen who might rely upon our system of public assistance. It places a financial value—or deficit—on the lives of people. It reduces us to whether we cost anyone anything. Many of us rely upon public programs, whether it’s a disability policy, a food bank or help with an insurance co-pay.

Already, immigrants—documented or not—are reportedly withdrawing from public assistance programs out of fear of being deported. That means families are going without food, housing and medications. They watch with terror as immigration authorities raid workplaces and arrest people, hauling them away, leaving their children to come home to empty apartments, if they are lucky enough not to be locked in cages themselves.

The parallels to a fascist state are unavoidable. Hitler did not target only Jews and homosexuals. His regime murdered the sick and disabled first.

“Terrible things are happening outside,” the now-famous online meme reads. “At any time of night and day, poor helpless people are being dragged out of their homes.... Children come home from school to find that their parents have disappeared.” This is a direct quote from Anne Frank’s diary entry of January 13, 1943.

Ah, but we are not living in the early 1940s, defenders will cluck in response. We are not in the midst of a great war, fighting a fascist army as it decimates millions of the most vulnerable.

That’s true. We are not living in 1943. We are living in a circus funhouse mirror version of 1939 on the eve of the unimaginable. Racism is excused and sometimes celebrated. Legal and political norms have been shredded. Our foreign allies have been insulted, and historic allegiances have been ruined. The lives of those who are not privileged, white, cisgender or heterosexual seem to hold no value.

Consider the classic riddle we have grappled with for decades. If we lived in Germany during the beginning of that unspeakable time, what would we have done? We’ve all played the game, most of us erring on the side of our own virtue.

History tells us otherwise. Far too many people were resigned to be “good Germans,” not willing to stick their necks out as long as the outrage happened a little farther down the social ladder from them. Our current times have asked and answered that question again—and the results are every bit as appalling.

The pressure on my battered psyche continues to mount. I watch that man on television, sitting beside world leaders with his arms crossed like a petulant child, engaged in his great, baffling obscenities, and I hold my breath for his next assault.

I find myself glued to social media, typing indignant responses to his supporters so angrily that the keys on my laptop are cracked. I shame them and then unfriend them and then block them, knowing all the while I am only spreading animosity like a poisonous gas, and then I worry about what they are saying behind the firewall that has been constructed between us.

Your silent judgment of my trauma makes me flush with embarrassment. I can’t tell from here if you are an ally, if you share this disdain, if you are afraid too or if you exist on the far side of this widening gulf between Americans. If you stand there, across the chasm, then I don’t want a bridge between us, not today. I want to unmoor you and set you adrift, far away from my reasoned worldview, as tormented as it may be.

Has the smoke cleared? Has order been restored? Is he still alive? Forgive that last question. I’m only human. I think about his health all the time.

I watch his frightening rallies, where he responds to the growing list of crimes laid at his feet by stepping on top of the pile and using it as his soapbox. I see him screaming his litany of grievances and think of the blood pumping strenuously through his arteries. I wonder this, yes, with rueful expectation.

There is sour comfort in musing about his demise, even if it would finally shut his mouth, that gaping, colossal abyss that spews and shouts and smirks but never, ever smiles in the way of humans. We should be grateful because the contortion it would require of him to approximate such an absurdly foreign expression might transform his face into a horror so Medusan we may never recover from the sight of it.

I am traumatized by my own hatred of the man, that much is clear, but I am also frightened about what he has ignited in the rest of us. On the night of the 2016 election, I realized I wasn’t safe anymore, that there were far more people who consider me disposable than I ever imagined.

Feeling safe is crucial for those of us living with HIV. Our very diagnosis was a traumatic event. It instantly marked us as supposedly unclean, untrustworthy and unwanted. It has taken hard work over the course of years for many of us to believe, deep down, that none of those negative labels are true.

Countless anti-stigma campaigns have been created to comfort us and educate the ignorant. These campaigns are more than window dressing. Trauma is a leading indicator of HIV transmission risk, and the trauma of HIV stigma can keep someone from seeking treatment and care. Trauma kills.

As a gay man, HIV stigma triggered the same feelings I had growing up in a Southern town. Being gay was a childhood secret that would have destroyed me if anyone learned of it. Eventually, I conquered my fears and found self-acceptance. Until my HIV diagnosis, that is, when those same feelings of shame and secrecy were triggered again.

We live in a constructed reality to survive, where we are loved by those who matter and try our best to ignore the haters. We might even practice a little healthy denial about how safe we actually are. And then something happens to puncture that belief system.

This presidency has ripped away the facade of safety for me and for the communities that make up the HIV arena. The racism, the xenophobia, the devaluing of lives—it all makes me that frightened young gay boy again, wondering where to turn and whom to trust.

Trauma lingers. It is cumulative.

Is it over yet? Have the cooler heads prevailed? Has the healing  begun?

Is it over yet? Have the cooler heads prevailed? Has the healing begun?

My trauma isn’t indulgent. It is real. And I am not alone. Therapists across the country report a rushing stream of new clients who are trying to process their anger. Mental health, an issue only acknowledged by our governmental leadership when trying to explain away the latest gun massacre, is being addressed by HIV service organizations as best as their limited resources will allow.

After the shock of the past few years, my trauma may never really disappear again. Not entirely. It may lie dormant, waiting for some unforeseen trigger to reactivate it. The only defense I have against future trauma is to take positive steps to remove the possibility of triggering it.

And that is where you come in, living as you do in the year 2020, a spot on the calendar that has been circled in red since this indecent period in our history began. I will soon join you in that momentous election year, and I intend to make the most of it.

Voter drives need volunteers. Candidates need support. For the first time in my life, I am ready and willing to leave my decidedly blue state to help progressive candidates in redder ones. We must fight through our collective trauma to begin the process of renewal.

Do not believe for a moment that your vote doesn’t count. Those with power will try to convince you otherwise, and people on both sides of our political divide will unnerve us with talk of foreign interference and voter suppression and election rigging.

Stand firm. The impeachment proceedings in the House would not have happened were it not for voters who swarmed the polls in 2018 and overturned the balance of power. We did that. We can do it again.

We can restore respect to our nation’s highest office, or at least install someone with humanity, dignity and the ability to reason. And, if the stars align, we might even have the opportunity to reach higher and bring a distant quality back to bear in the White House—nobility.

To consider the meaning of that word makes me weep. I can’t be asking for too much. I refuse to believe it is impossible. Even in the haze of debilitating trauma, I stubbornly believe in hope.

What happens next is up to us.

How Pervasively Ugly Is HIV Stigma?