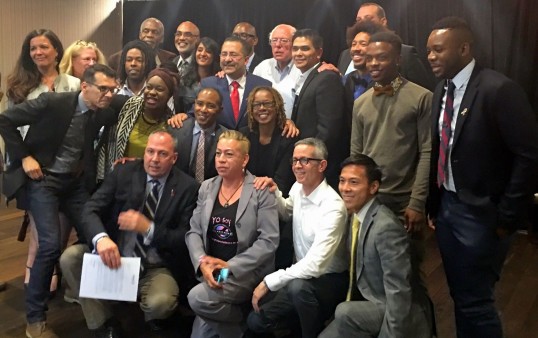 A summary of the dust-up between AIDS activists and the Sanders camp. Plus: What’s that controversial ballot initiative about?

During the Memorial Day weekend, a rift widened between the Bernie Sanders campaign and a group of leading AIDS activists. Here’s a roundup of the events and the takeaways, including a summary video segment from MSNBC’s AM Joy.

As POZ reported last week, presidential candidate Bernie Sanders met on May 25 with 20 AIDS activists who represent a national coalition of AIDS leaders (Hillary Clinton met with the group earlier in the month). The next day, the Sanders campaign issued a press release on the event. It was titled “Sanders Backs California Ballot Initiative to Rein in Drug Prices at Meeting with HIV/AIDS Advocates,” which the advocates felt misrepresented the meeting; activist Peter Staley took to Facebook to express “feeling used and abused by the Sanders campaign.”

Housing Works, a group that fights HIV and homelessness and has been involved in the AIDS activists meetings, issued a joint statement titled “An Open Letter to Senator Sanders Challenging the Characterization of the Meeting with HIV/AIDS Activists.”

“As 19 representatives of the coalition, nearly half of whom are either based in or affiliated with organizations in California, we are deeply concerned as this may now appear as if we were exploited for short-term political gain leading up to the imminent California Presidential Primary Election.

“Your campaign’s release title and the bulk of its content mislead readers and the press to believe that our May 25 meeting was primarily focused on your endorsement of a California ballot initiative on HIV drug pricing. By extension, it also implies that our national HIV/AIDS coalition also fully endorses this initiative. Both these characterizations are inaccurate.

“While our coalition is frustrated by your campaign’s release about the initiative, which was only touched upon briefly during our time together, we are eager to continue the dialogue around the other critical issues that were the focus of the meeting, especially: your commitment to ending AIDS as an epidemic in the U.S. by getting to below 12,000 new annual HIV infections by 2025; ending the global epidemic by 2030 by increasing the U.S. global AIDS funding commitment by $2 billion dollars per year; groups at high risk for HIV infection, including transgender persons and those incarcerated.”

Meanwhile, Sanders’s policy director, Warren Gunnels, tweeted that Peter Staley was someone who “made a fortune from big drug companies,” which set off a flurry of tweets, including one from Staley refuting the accusation and some from LGBT advocate Dan Savage, who said the attack on Staley was “appalling.”

Millions of gay men alive & able to vote today thanks to @peterstaley. Attack on Peter from Sanders camp appalling. pic.twitter.com/LjUyi7x2vQ

Calling @peterstaley and AIDS profiteer is right up there with calling Nancy Reagan an AIDS activist.

As the kerfuffle escalated, MSNBC host Joy Reid did a segment on the topic, during which Staley called in. When asked whether he had any ties to big pharma, specifically to Gilead Sciences, the makers of several HIV meds, Staley replied that the accusations “have no basis in fact. I’m actually unemployed right now. I’m a harsh critic of Gilead.”

Staley did say the confusion might lie in the fact that he has been warring for years with Michael Weinstein, the president of AIDS Healthcare Foundation (AHF), who has been a vocal critic of HIV prevention pill Truvada as PrEP, pre-exposure prophylaxis. AHF sponsors the California initiative that the Sanders campaign promoted in its press release.

Here’s a link to the segment of AM Joy:

But what is this ballot initiative everyone’s talking about? After gathering enough signatures, it is headed to the October 2016 ballot in California. Titled the California Drug Price Relief Initiative, it basically says that state agencies and health care programs can’t pay more for drugs than what the U.S. Department of Veterans Affairs pays. According to AHF, which runs a network of HIV clinics across the globe, the VA prices are about 20 percent below free-market prices.

While this may sound good, many advocates are concerned that the measure might actually limit access to medications or drive up the prices (more info can be found here and here). As Staley mentioned in an earlier Facebook post after meeting with Sanders:

“Senator Sanders never brought the issue up during our meeting. WE brought it up near the end, only to tell him that we had been flooded with messages from all the leading AIDS organizations in CA with deep concerns about AHF’s initiative—they are worried it could actually negatively impact access to AIDS drugs. Those groups have tried to reach the campaign with these concerns but had hit a brick wall. We asked Sanders to designate someone in his campaign to talk with these groups, and he agreed to this. WE DID NOT ENDORSE AHF’S INITIATIVE.”

On Tuesday, May 31, Staley posted a clarification, noting that Sanders did in fact mention the topic of the ballot initiative. On Facebook, Staley writes:

“I’m probably going to be crucified for this, but you’re hearing it here first. I’ve been saying Sanders never mentioned his endorsement of the CA ballot initiative until we brought it up late in the meeting. I was partially wrong. He mentioned ‘the ballot act that will be up in November on the pharmaceutical industry’ in passing during his opening comments before pivoting to his boilerplate (and legitimate) harsh take on big pharma (THAT, I remember), without mentioning an endorsement. It wasn’t raised again until we brought up his endorsement late in the meeting to point out the concerns that our CA partners had with the ballot initiative. I just got corrected on this today, and I’m sorry I missed it. This is no way changes the coalition’s critique of the Sanders press release. Housing Works will be posting our full notes on the meeting tomorrow morning.”

If you’d like more details about the Sanders meeting with AIDS advocates, Housing Works has posted the minutes to the meeting here, including a list of attendees.

Meanwhile, Sanders policy director Gunnels has deleted his tweet about Staley, and Staley told Reid: “We would love to get back to the fact that we had a fairly productive meeting with the candidate himself. It went well, and he said some great stuff and we want to continue that…and to keep HIV/AIDS in the foreground.”

To help ensure that these types of problems don’t reoccur, Staley has written and posted an article on his POZ blog titled “Tip Sheet for Presidential Campaigns: How to Interact With Single-Issue Advocates, With AIDS as a Recent Example.”

Other prominent HIV advocates, such as Gregg Gonsalves, offer a different takeaway:

.@peterstaley & .@BernieSanders have more in common than they realize. Let’s move on. Get rid of Trump. Build a progressive American future.