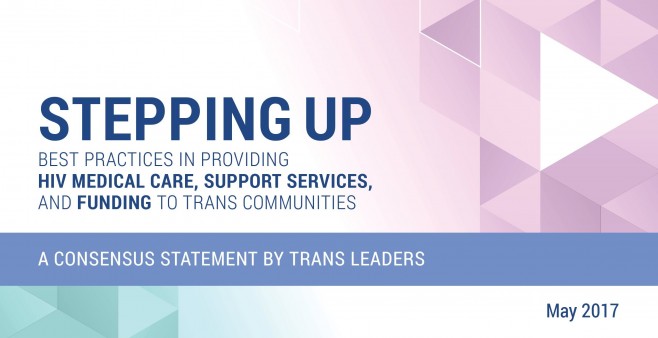 To answer that question, these 12 transgender leaders drafted a consensus statement for AIDS United.

A consensus statement released by AIDS United titled Stepping Up offers best practices for offering HIV medical care, support services and funding to the transgender community, according to a press release by the organization.

The 15-page resource—which can be downloaded for free here—is the work of a think tank of 12 transgender leaders convened by AIDS United last December in Detroit, with support from Janssen Therapeutics. It’s part of the newly launched Transgender Leadership Initiative, which was developed by AIDS United and funded by Janssen.

The topic is important because the epidemic disproportionately affects the transgender community. As the press release points out, a 2013 survey estimates that 22 percent of transgender women are living with HIV—the highest of any other group. The disparity is a result of violence as well as discrimination in the areas of housing, employment and medical care.

“Our recent survey shows 41 percent of the respondents reported lapses in health care for longer than six months,” said Cecilia Chung, a transgender and HIV activist, in the press release. “This speaks to the need to meaningfully involve trans people living with HIV in cultural competency training and program designs. Trans people are experts of their experiences, and this consensus statement puts the expertise of trans people front and center.”

The statement’s full title is Stepping Up: Best Practices in Providing HIV Medical Care, Support Services, and Funding to Trans Communities. A Consensus Statement by Trans Leaders. Below are the names of the 12 people who drafted and signed the consensus statement: