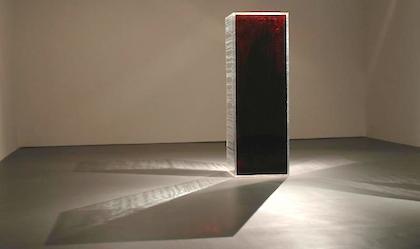 Using the blood of nine gay men, artist Jordan Eagles created the sculpture “Blood Mirror” as a protest of the Food and Drug Administration’s (FDA) ban on gay blood donors. Filmmaker Leo Herrera documented the project in a short film available online, according to a press release by GMHC, whose CEO Kelsey Louie is one of the nine men.

Since 1983, the FDA has prohibited men from donating blood if they’d ever had sex with another man, even once, since 1977. A new proposal will allow gay men to donate blood if they’ve been celibate for one year. Through July 14, the FDA is accepting public comments on the proposed change.

“Blood Mirror” and the related film urge the public to contact the FDA and oppose the proposed policy and instead support a policy that is based on each donor’s individual exposure to risk, not on his sexual orientation.

“Blood Mirror” will be on display September 12 to October 18 at the American University Museum at The Katzen Arts Center in Washington, DC. It will then travel throughout the country.

And you can watch the “Blood Mirror” short film below.