For these three projects, the personal is political—and empowering.

Blood Mirror
Artist Jordan Eagles used the blood of nine gay and bisexual men—including an Iraq vet, a GMHC leader and a trans man—to create the monolithic sculpture “Blood Mirror.” The 7-foot-tall Plexiglas artwork is a comment on the FDA’s proposed policy of allowing gay men to donate blood only if they’re celibate a full year. “The sculpture asks us to reflect on discrimination and homophobia,” Eagles says. “For me, the sculpture is a work in progress; it will never be finished until the FDA’s blood donation policy is fair for all people.” Check out “Blood Mirror” at the Katzen Arts Center in Washington, DC, along with the artist’s related works and collaborations. 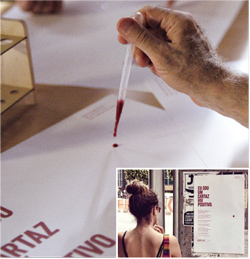 HIV-Positive Posters
In São Paolo, ad agency Ogilvy Brazil created an anti-stigma campaign for Life Support Group, a nongovernmental organization that fights HIV/AIDS. Posters made with drops of HIV-positive blood were placed around the city, with messages that read in part, “I’m just like any other poster. Except for one thing. I’m HIV positive.… At this point, you may be taking a step back, wondering if I offer any danger.” Readers’ reactions were filmed for a short video that garnered views across the globe—including on the POZ website, where one commenter noted that the video “gives me hope that one day I won’t have to hide from the stigma!!! Simply Beautiful!!!!”

Vangardist Magazine
German men’s magazine Vangardist, which is based in Austria, teamed up with ad firm Saatchi & Saatchi Switzerland to print a special issue using ink infused with HIV-positive blood. Inside the issue were stories highlighting HIV-positive heroes. The magazine’s hands-on approach to ending stigma and breaking taboos was timed with Vienna’s annual Life Ball, which is one of the most spectacular HIV/AIDS fundraisers in the world.