It’s possible to prime the immune system to kill the HIV-infected reservoir CD4 cells that frustrate cure attempts. Researchers drew immune cells and HIV-infected reservoir cells from 10 people who started treatment within three months of HIV infection (“early”) and 15 who started after (“late”). Scientists then looked at the “killer” CD8 immune cells in both groups. These cells are usually the body’s dominant force against infection. The CD8s of early treaters could seek out and destroy reservoir cells that had been brought out of their dormant state and made to replicate virus. This wasn’t the case for those treated late; almost all of the virus in their reservoir cells had mutated to the point that it could evade detection by typical CD8s. So the scientists took other kinds of CD8 cells that were able to detect, if not kill, the reservoir cells in the late treaters, and stimulated them with artificial elements representing various parts of the virus. These “boosted” CD8s successfully killed the HIV-infected reservoir cells in both a lab setting and in mice. 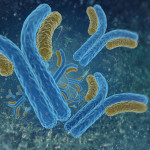