A 65-year-old athlete living with AIDS participating in the marathon at the quadrennial Gay Games shares his HIV memories.

I am a 65-year-old athlete living with AIDS on Cape Cod. I will be participating in the marathon at the quadrennial Gay Games that are being held this August 4 to 11 in Paris representing Provincetown, Massachusetts. This will be my eighth Gay Games.

The Gay Games was the brainchild of Tom Waddell, an Olympic athlete who competed in the 1968 Olympics in Mexico City. The first Gay Games was held in San Francisco in 1982. That same year AIDS was named. As an elite athlete Tom Waddell had first-hand dealt with prejudice towards gay athletes not being able to participate openly in sports and had a vision to create an Olympic style event to change the world based on inclusiveness. Competition is open to everyone regardless of the level.

There is always a place for someone who might be suspected to have a handicap. I have a handicap but it has not prevented me from running with AIDS in important marathons in both the United States and Europe at large.

On June 16, 2018, I was standing before the new AIDS Memorial in Provincetown during the dedication and thinking I will be going to run the marathon at the Gay Games in Paris. In 1989 I suspected I was HIV positive when I ran my first Boston Marathon. I soon would be diagnosed HIV positive before I ran in my first Gay Games Marathon in Vancouver in 1990. I would run more marathons as an HIV-positive athlete.

Then after nearly dying from AIDS I was the first person in 1997 to complete the Boston Marathon. That same year I would be selected to crew on Survivor, an all HIV/AIDS crew that raced in the 1997 TransPac—a prestigious boat race held every two years since 1902 racing from Los Angeles to Honolulu. An HBO documentary Rock the Boat chronicles our challenges and accomplishments during the race.

I was no stranger to training before the AIDS epidemic hit. And ever since I have been aware of the demands made on my body by AIDS. Last year the discovery that I had cancer presented me with another deadly health challenge. Fortunately I responded to the treatment in such a way to be currently considered cancer-free. Part of my success at defeating such major obstacles is being aware of the medications I am taking.

For example, in my battle with AIDS I know the medications used as treatments can be poisons to the body. I chose a holistic path that would lead me further into the world of integrative medicines. My persistence in using such medicines I believe, along with spirituality and intensive physical workouts, are totally positive for my well-being. The fact that I have run over 30 major marathons speaks to my determination as an athlete. Not many AIDS patients can boast of a record like this.

Today I find myself to be the oldest survivor of AIDS running in marathons both here and abroad. I have been able to do this with the love and encouragement of my family of friends. As the Olympic Games remember and honor the great athletes of the past, so I also remember and celebrate all those who fell on the battlefield of AIDS. 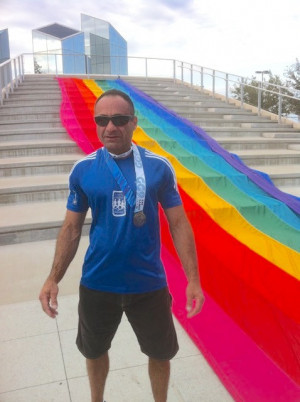