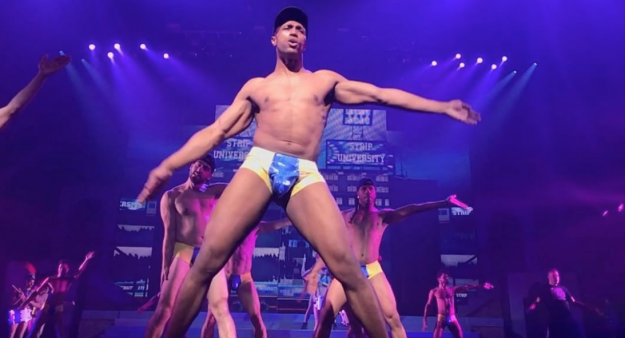 This year’s college-themed burlesque-style show was a class act of 181 dancers. Watch the sizzling highlights here.

The members of the 2017 graduating class of Broadway Bares didn’t wear traditional caps and gowns—in fact, they didn’t wear much of anything at all! But the 27th annual striptease-meets-vaudeville extravaganza raised $1.57 million for Broadway Cares/Equity Fights AIDS (BCEFA), which distributes the funds to HIV/AIDS groups across the nation.

The one-night-only event featured two back-to-back shows starring 181 of the barest and buffest boys and girls of the Great White Way. Nick Kenkel directed the June 18 production at Hammerstein Ballroom in New York City. You can watch the highlights reel here:

Playbill.com offers its own roundup of standout numbers from the evening, which began, naturally, with a freshman orientation number and ended with graduation. In between, audiences were treated to a fine arts class where students stripped to Ed Sheeran’s “Shape of You.” Other numbers featured a chemistry lab (think Rocky Horror Picture Show), a pep rally and a feminist studies class. And no college-themed show would get a passing grade without an Animal House–styled Greek toga party.

To learn more about BCEFA, including its history and the HIV/AIDS work it does, read our POZ feature “The Show Must Go On.”

And for more scintillating reporting (and possibly NSFW images), check out the Boy Culture blog here, or search for Broadway Bares and BCEFA on social media.

Welcome to the #BroadwayBares: Strip U campus! We know you’re gonna love it here.

Class is in full session for #broadwaybares #stripuniversity and your donations ensure you teachers pet status complete with prizes for your generosity!! Any and every amount helps! Link in bio! #bcefa #broadway #naked #hammersteinballroom #lsteventaylor ???? @joelkarie ❤️❤️❤️