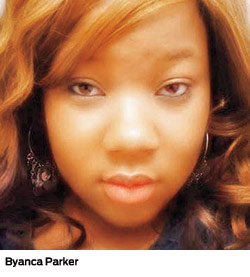 When Byanca Parker was told she was living with HIV, she reacted like most anyone would. “It was scary and confusing,” she recalls, adding that matters were further complicated because, “at the time, I had no idea what HIV was.” There was good reason for her lack of knowledge—she was in sixth grade. Parker was born with HIV in 1993.

Learning about her status did explain a lot of mysterious aspects of her life, such as why she took so many pills and got sick more often than other kids—and why her mother’s health continued to deteriorate (she died of AIDS-related complications in 2003).

Since learning of her status, Parker, who lives in Dallas, has gotten to know many other people who were born with HIV. “I don’t think it’s fair,” she says, “for an innocent baby to come into this world fighting for its life because the parents didn’t know their status.”

Despite the challenges of living with HIV—Parker acknowledges that the side effects of her meds can be “sometimes overwhelming”—she has learned how to accept her status and, in the process, build her self-esteem.

Today, Parker describes herself as a “persistent, optimistic and intelligent” person who is sharing her story. “I want to help motivate others to get tested,” she says. “I want to help save lives.”

To read more about Parker and other POZ Stories, or to tell your own tale of empowerment, visit poz.com/stories.