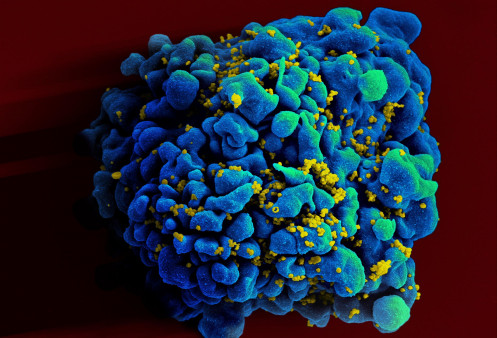 The Campbell Foundation awarded a $90,000 grant to Otto Yang, MD, an infectious disease scientist at the University of California at Los Angeles (UCLA), to study how HIV might mutate and evade CAR-T gene therapy developed as an HIV cure.

The Food and Drug Administration first approved CAR-T therapy—which stands for chimeric antigen receptor T-cell therapy—in 2017. It’s used to treat some forms of cancer, but as POZ’s sister publication Cancer Health has reported, it hasn’t been commonly used because it is expensive and must be custom made for each patient.

In the case of cancer treatment, CAR-T immunotherapy involves taking a patient’s T cells, which naturally fight infection, and sending them to a lab where they are genetically modified to recognize and attack the cancer. Meanwhile, the patient receives chemotherapy to kill off some of their existing immune cells to make room for the new, modified ones, which are then infused back into the patient.

Last month, cancer specialists announced that the first two people treated with CAR-T therapy, a so-called living drug, remained cancer-free for a decade and could be considered cured.

The hope is that this will be possible with HIV as well. In CAR-T therapy for HIV, blood-forming stem cells would be genetically engineered to give rise to T cells that would seek out and destroy cells infected with HIV.

That’s where Yang and the Campbell Foundation grant come into play. Yang hopes to better understand how HIV will mutate in the face of CAR-T therapy.

“We are studying ‘chimeric antigen receptors’ (CARs), which reprogram T cells to kill HIV infected cells when the CAR attaches to the HIV envelope protein on the infected cell,” Yang explained in a Campbell Foundation press release. “A key concern is that HIV may be able to develop mutations that allow it to escape from binding by the CAR, just as it can develop escape mutations against drugs or antibodies. Our focus is to determine how HIV can mutate to escape. This is an important first step toward developing strategies to cope with the issue."

“Yang’s studies will likely not only inform the CAR-T/HIV field, but also provide additional understanding about the role of the CAR-T technology in general, including its possible application in other infectious diseases,” wrote the Campbell Foundation in its grant announcement, adding that “the work will be directed by an established and productive investigator.”

CAR-T therapy is at the forefront of HIV cure research. Last year, the National Institute of Health announced a $13.65 million grant over five years, also to researchers at UCLA, to develop the immunotherapy specifically for an HIV cure.

To date, only three people have been cured of HIV, and all three cases involved stem cell transplants needed to cure their cancer. The latest case was announced last month; for details, see “New York Woman May Be Cured of HIV After Stem Cell Transplant.” Timothy Ray Brown, aka “The Berlin Patient,” was the first person cured of HIV. He was diagnosed with leukemia in 2006 and received a transplant with stem cells that had the rare ability to block HIV from entering them. He died in 2020 at age 54 after his cancer returned. The second person cured is Adam Castillejo, aka “The London Patient,” who grew up in Venezuela and announced his HIV cure in March 2020.

Stem cell transplants are so risky that they are done only in people with HIV who need them for cancer treatment. Using gene therapy such as CAR-T therapy to modify an individual’s own stem cells might be a safer way to achieve the same result.

The Campbell Foundation, which celebrated 27 years last month and is located in Fort Lauderdale, funds nontraditional laboratory-based HIV research. In its efforts to support HIV research, it has awarded over $11.5 million.

To read more about Campbell’s research grants, check out the following POZ articles: