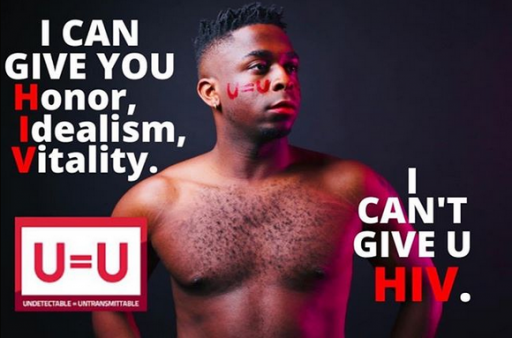 Hint: It starts with three letters.

The call to action went out via social media: “Are you a person living with HIV who would be interested in participating in this awareness campaign? Email a picture of yourself along with ONE word beginning with H, I and V that describes what you CAN give to others. I will be posting and sharing on various social media platforms with a vision of putting together video submissions as the next version of this campaign.… Please send your submission, via email, to me at ICanGiveUcampaign@gmail.com.” 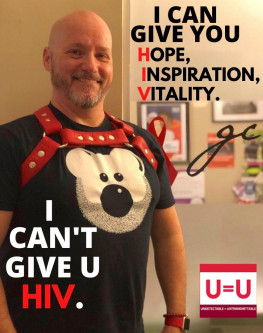 Thus, Randy Davis, pictured in the red harness above, launched the “I Can Give U” campaign to bring awareness to the Undetectable Equals Untransmittable (U=U) message that people with HIV who maintain an undetectable viral load cannot transmit the virus through sex, even when condoms are not used. The campaign also highlights amazing and diverse members of the HIV community.

The resulting campaign shows the person’s photo along with the phrases “I Can Give You [the three words that start with H, I and V]” and then the kicker: “I Can’t Give You HIV.”

Davis—also known as The Accidental HIV Activist on social media—is the gay men’s sexual health coordinator at the Gilbert Centre in Barrie, Ontario. He’s also the host and producer of the YouTube video series Let’s Be Perfectly Queer, many episodes of which touch on topics related to HIV, such as the one below titled “Slay the Stigma.”

We at POZ have been enjoying seeing images from his “I Can Give U” campaign on our social media feeds, so we emailed him to learn more.

First off, how did the “I Can Give U” campaign come about?

It comes across as a little corny, but the idea for this campaign actually came to me in a dream about 18 months ago. I was diagnosed in February of 2015. I’ve been involved in various awareness initiatives around HIV/AIDS since publicly disclosing my status in September 2017, including the Canadian version of “Can’t Pass It On,” but I wanted to create something that focused on all the wonderful things folks living with HIV and on effective treatment can give to the world!

While the “I Can Give U” campaign is not formally tied to any specific cause or program, my intention was to help raise further awareness of the Prevention Access Campaign’s U=U message and movement.

ICYMI... On the latest episode of Let’s Be Perfectly Queer with Randy Davis, the tables get turned as I sit in the seat...

What inspired you to launch this project, and what do you hope it achieves?

What inspired me was to show folks living with HIV that our value doesn’t equate to our viral load and that we are so much more than just what we can’t give. I want people living with HIV to also focus on their quality of life. What that looks like can be different but just as valid for each of us. My hope is that this project creates more conversations and raises awareness that will help combat the stigma faced by all folks living with HIV.

How have people responded to the campaign?

The response has really been overwhelming and has taken me by surprise. I first presented the concept of the campaign to a group of people living with HIV during a two-day leadership workshop in April 2019, and there wasn’t a dry eye in the room when I was done. I knew I had something special but had no idea it would resonate with folks the way it has.

Interested in participating in the “I CAN GIVE U” campaign? If you are a person living with Undetectable HIV, and want to get involved, send your picture and three words beginning with H, I & V that describe what you CAN GIVE our world. Please send your submission to iCanGiveUcampaign@gmail.com #ICanGiveU #UequalsU #ICantGiveUHIV #ScienceNotStigma #FactsNotFear

It’s been a combination of friends and folks I know, but the vast majority have been total strangers who have seen the posts on social media and want to participate. The original post was of myself, but since then, I’ve had folks from all seven continents except Antarctica send me submissions. Australia, Canada, Germany, Peru, Thailand, Uganda and the United States are some of the countries I’ve received requests to participate from. The campaign has even been translated in French for people in France who want to get involved, and I’m working with a colleague on translations in Spanish, Italian and Portuguese.

How long will you be accepting participants?

I am committed to continuing this campaign for as long as folks want to keep sending me their pictures and H, I and V words! I hope to create another interpretation of the “I Can Give U” campaign in video format sometime in early 2021 and would love to see the campaign picked up by a national organization, big pharma or public health to increase the exposure and reach even further than we’ve already seen.

The “I CAN GIVE U” campaign has almost taken on a life of its own! I am Humbled, Inspired and Verklempt by each of your contributions.
Send your picture and H, I and V words to me at randyjohndavis@gmail.com????#ICanGiveU#UequalsU #ICantGiveUHIV #ScienceNotStigma #FactsNotFear pic.twitter.com/Pf5okuQKiN