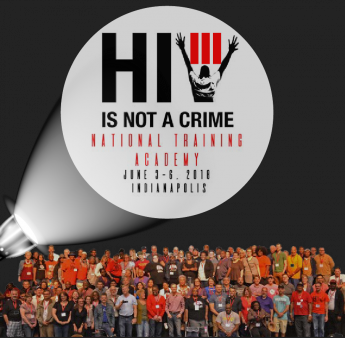 Detail from the cover of this year’s program Courtesy of HIVIsNotACrime.com

The program takes place June 3 through 6 in Indianapolis, but the main sessions will be streamed live on Facebook.

The third HIV Is Not a Crime Training Academy takes place June 3 to 6 in Indianapolis, but you can watch and learn from the sessions regardless of where you are—as long as you have access to Facebook. That’s because advocate and blogger Mark S. King will be live streaming the plenary sessions on the social media platform.

HIV Is Not a Crime III gathers together activists, legislators, lawyers, people living with HIV and other experts to discuss and plan ways to reform and modernize laws that criminalize HIV. The program is co-organized by the Sero Project and Positive Women’s Network–USA.

According to a press release about the academy, the theme of this year’s event is “Getting to Zero Prosecutions,” which is a play on the “getting to zero” campaigns regarding HIV transmissions.

You can view and download the entire program, including the meetings, meals and events of BULI and the regular training academy, here.

More than 250 participants are expected, arriving from 30 states, Puerto Rico and six other countries (one entire plenary session is dedicated to the Latin American fight against criminalization).

The methods for reforming HIV-related laws vary not just from country to country but from state to state and even from city to city. “Some states, like Texas, don’t have HIV-specific laws but still actively use general assault laws to criminalize even acts that carry no risk whatsoever of HIV transmission,” explained Tami Haught, organizing and training coordinator for the SERO Project, in the press release.

“So fighting HIV criminalization will look different from Indiana, where there are HIV-specific laws on the books. North Carolina advocates worked with the department of health and county health directors to modernize their public health codes. In some states, we need legislators to champion our issue. In others, we may be educating prosecutors and judges. In Mexico, the Supreme Court very recently found the HIV criminalization laws in the state of Veracruz to be unconstitutional. As advocates, we have to be ready to explore all the options and also understand that sometimes larger change happens in smaller steps over years.”

As such, the training academy is a place for advocates to share strategies and celebrate success.

What Happens to PEP Prescribing Post-Lockdown?