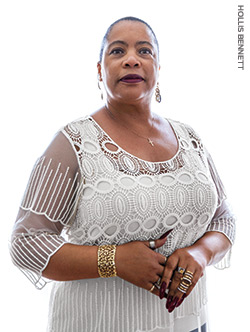 When Catherine Wyatt-Morley, a married mother of three from Tennessee, was diagnosed with HIV in 1994, she remembers facing debilitating stigma from almost everyone in her life. After her husband died of AIDS-related complications, she was given her “death date” and told to get her affairs in order.

“There wasn’t anything in my community at the time that addressed me as a heterosexual, African-American woman living with HIV,” Wyatt-Morley says. So, she plugged into the burgeoning national positive women’s movement. Then, from a bedroom in her Nashville home, she launched a nonprofit AIDS service organization, WOMEN (an acronym for Women on Maintaining Education and Nutrition).

Nearly 19 years later, Ms. Catherine—as everyone refers to her—is CEO of the group and the author of AIDS Memoir: Journal of an HIV-Positive Mother. As such, she’s one of the most powerful female advocates for women living with HIV in the Deep South today.

Through WOMEN, Ms. Catherine has helped scores of HIV-affected families get access to food, health care, HIV testing and support through a wide web of services. She has also traveled the globe to empower HIV-positive women in places like Africa, China and Poland.

Today, she’s looking once again to change the way HIV care is provided in her community, with a new project-in-the-works: WOMEN’s HOUSE, a university-style campus where  newly diagnosed women will be able to come for an intensive course on all things HIV.

“WOMEN’s HOUSE is my main drive,” says Ms. Catherine, adding that the name is short for “Home of United Self-Empowerment.”

Though still ironing out the details (and the funding), she believes the project will become one of the most holistic models of care offered to families dealing with HIV today. She plans to bring her network of doctors, case managers, teachers, inspirational speakers, family counselors and other HIV experts to the 30-acre, rural property, located about an hour outside of WOMEN’s headquarters in downtown Nashville. While at the HOUSE, they will help both on- and off-campus students learn how to live healthy with HIV and stay that way.

“We’re taking the lessons we’ve learned over the course of 20 years to develop the framework and infrastructure of this facility,” says Ms. Catherine, who already maintains a waiting list for the first class.

Researchers are interested too. They’ll be looking at the project as a case study for expanding HIV services in the future. In short, Ms. Catherine says, “WOMEN’s HOUSE will change the landscape of HIV for women.”