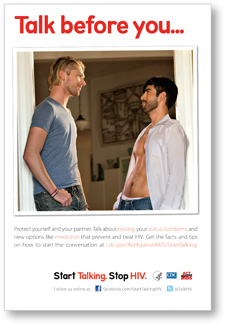 Men who have sex with men (MSM) account for two-thirds of new HIV cases each year, despite comprising only 2 percent of the U.S. population. So the Centers for Disease Control and Prevention’s latest HIV prevention campaign—“Start Talking. Stop HIV.”—is much needed. Its videos, posters and behind-the-scenes footage feature 37 gay and bisexual men talking about how they communicate with their sexual partners about HIV. Considering that previous CDC campaigns largely ignored the romantic and sexual lives of gay men, “Start Talking” makes for a great conversation starter.

Does it go far enough? Not even close, say ACT UP New York and its allies. This summer, they released The Atlanta Principles, a series of proposed actions for the CDC’s prevention efforts. A few examples: Recommend more frequent testing, promote pre- and post-exposure prophylaxis (PrEP and PEP), and adopt messaging that deals frankly with sex.