Black and Latino men who have sex with men are not seeing the same improvements as white men, but innovative approaches can help.

Despite overall progress in reducing HIV among men who have sex with men, Black and Latino gay and bisexual men are not seeing the same decrease as white men, according to the latest Vital Signs report, released by the Centers for Disease Control and Prevention (CDC) for World AIDS Day. HIV care indicators, including diagnosis, viral suppression and use of pre-exposure prophylaxis (PrEP), are also lagging for these men.

“To end the HIV epidemic, we will need to address the systemic factors that turn health differences into public health injustice,” report co-author Demetre Daskalakis, MD, MPH, director of the CDC’s Division of HIV Prevention, told POZ. “That starts with recognizing that HIV disparities are not inevitable.”

As described in Morbidity and Mortality Weekly Report, Marc Pitasi, MPH, of the CDC’s Division of HIV Prevention, and colleagues analyzed data from the National HIV Surveillance System, National HIV Behavioral Surveillance and Medical Monitoring Project from 2010 to 2019, the decade before the implementation of the federal Ending the HIV Epidemic in the U.S. initiative. They also looked at 2017 data on PrEP use collected from HIV-negative men who have sex with men in 23 cities. 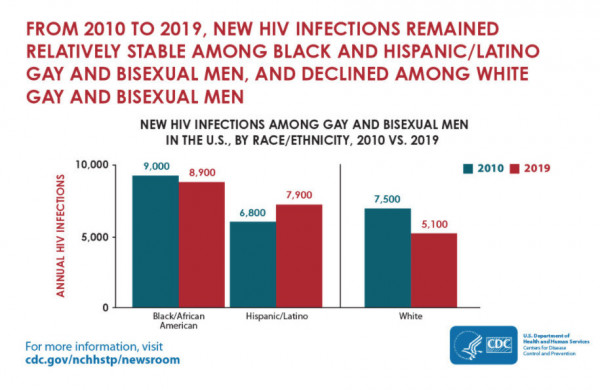 HIV care indicators also lagged for Black and Latino gay and bi men, who were less likely to receive an HIV diagnosis and achieve viral suppression. Among the estimated 692,900 gay and bi men living with HIV in 2019, 85% overall knew their status. But Black men (83%) and Latino men (80%) were less likely to have been diagnoses than white men (90%). Young men ages 13 to 24 were least likely to know their status (55%). 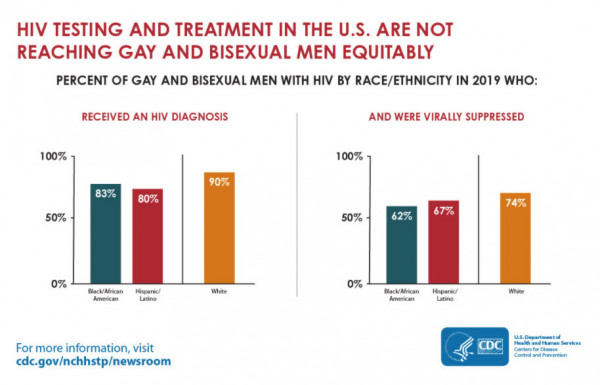 Moving along the care continuum, an estimated 62% of Black and 67% of Latino gay and bi men diagnosed with HIV reached an undetectable viral load, compared with 74% of white men. This is a concern because viral suppression halts disease progression and prevents sexual transmission of the virus (a concept known as Undetectable Equals Untransmittable, or U=U).

Interestingly, rates of reported adherence to antiretroviral therapy were lower in all three groups (48%, 59% and 64%, respectively) than their rates of viral suppression. 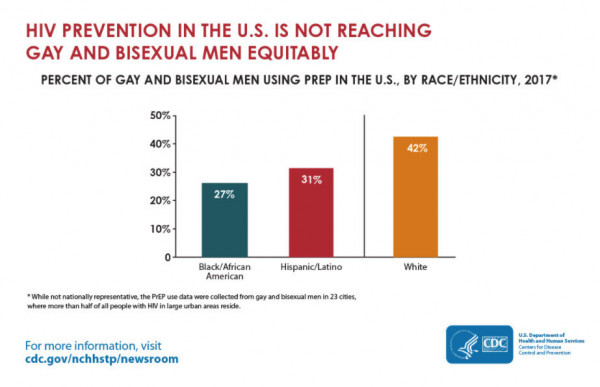 What’s more, gay and bi men of color were also less likely to use PrEP for HIV prevention. Only 27% of Black men and 31% of Latino men who could have benefitted from PrEP were using it in 2017, compared with 42% of white men. Black and Latino men were also less likely than white men to say they had discussed PrEP with a provider (47%, 45%and 59%, respectively). Men ages 18 to 24 (27%) or 55 and older (24%) were less likely to use PrEP than those in between.

Nearly 80% of the 7,577 HIV-negative gay and bi men in this sample said they were tested for HIV in the past 12 months, but most of those who had not been tested in the past year were not offered a test when they visited a provider. Rates of recent testing and the likelihood of being offered a test did not differ by race or ethnicity.

Finally, the CDC researchers looked at HIV-related stigma, or negative attitudes and beliefs about people with HIV that may contribute to disparities. In response to 10 statements asking about different aspects of HIV stigma, with scores ranging from 0 (no reported stigma) to 100 (highest level of reported stigma), Black and Latino men who had sex with men had median scores of 33 and 31, respectively, compared with 26 for white men. Men ages 18 to 24 had the highest stigma score (39).

Reaching the Ending the HIV Epidemic goal of reducing new HIV cases by 90% by 2030 will require that at least 95% of new infections are diagnosed, 95% of people who are diagnosed achieve viral suppression and 50% of eligible HIV-negative people use PrEP. But in 2019, just 85% of gay and bi men with newly acquired HIV were diagnosed, 68% of those diagnosed were undetectable and a third of those eligible were on PrEP, the study authors noted.

“Several innovative and culturally appropriate strategies have successfully reduced barriers to access of services and might help achieve national goals of improving prevention, diagnosis, and treatment of HIV infection among MSM [men who have sex with men],” they wrote. They recommended a “status-neutral” approach in which gay and bi men are engaged in HIV prevention or treatment services regardless of their HIV status.

Long-acting antiretrovirals for treatment and prevention, for example, could help expand access and encourage good adherence. HIV self-testing has the potential to reach more gay and bi men and reduce stigma. Approaches supported by the Ryan White HIV/AIDS Program—which have been shown to reduce disparities—could be scaled up to all facilities that provide HIV care. PrEP uptake could be improved by ensuring that PrEP providers are available in the communities most affected by HIV and by integrating PrEP services into existing clinical settings. Telehealth, widely adopted during the early months of the COVID-19 pandemic, could play a role for some people.

"Right now, with the federal ’Ending the HIV Epidemic in the U.S.’ initiative and effective prevention and treatment tools at our disposal, we have a decades-in-the-making opportunity to end our nation’s HIV epidemic and erase the glaring health disparities highlighted in this report,“ Daskalakis said. ”But working to achieve equity for gay and bisexual men of color requires tearing down barriers to testing, prevention, and treatment."

As part of the initiative, the CDC is working with partners to scale up science-based HIV treatment and prevention strategies in ways that reach populations equitably. To address these inequities, the CDC says the nation must get to the ROOT of the problem: