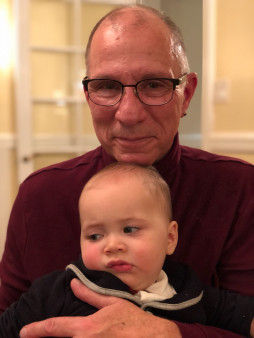 Will Wilson with his nephew Auden Courtesy of Will Wilson

In the mid-1980s, I lost so many friends to AIDS that I bought two outfits so I could switch back and forth for the near-daily funerals. My friends and I originally thought that being in Chicago – versus New York or San Francisco – would protect us. But the AIDS scourge knew no geographic boundaries and when I was in my 30s, my world came crashing down as I lost one friend after another.

When the first HIV test became available in 1985, I took it. It came back positive, but because the false positive rate was so high I chose to believe it was incorrect and vowed to live a safe and healthy life. I started working out, became an avid cyclist and stopped having sex. But in 2002 I saw a doctor for knee pain and was talked into taking another HIV test. This time, I knew what the positive results meant.

The meds I was prescribed sat on the table for six weeks. I knew the drug regimen was a lifelong commitment and that I needed to ensure I had good medical care for support. I tried a few different health care providers and finally felt at home at Howard Brown Health’s Halsted location.

It was a homecoming of sorts. I had volunteered at Howard Brown Health in the 1970s, at its inception. And I saw, way back then, the dedication of everyone who worked there. To this day, I believe that Howard Brown is where the work gets done.

It took some time to figure out the medication, but now I have no side effects. I’ve been going to Howard Brown for 15 years and my virus has been undetectable for 10 years. When I got a sore throat, I learned I had cancer on my vocal cords, but I had surgery and am doing well. When my sister was diagnosed with cancer, I began seeing a therapist at Howard Brown.

Now, I work as a barista at a local coffee shop. I will be celebrating my 66th birthday on December 1, which is the same day as World AIDS Day.

Recalling the difficult early days of AIDS, I feel fortunate to have survived, and committed to advocating for others so they don’t have go through the same things I, and others, did. I translate my gratefulness into helping others. The best part is to get people to care for themselves.