Over $11 million has been awarded to alternative, lab-based clinical research—and $1.2 million to Holiday Hugs.

Since its inception in 1995, the foundation has provided more than $11 million in funding through 165 clinical research grants, according to a Campbell press release. Through its end-of-the-year Holiday Hugs, it has provided an additional $1.2 million in 360 relief grants to service providers such as Broward House and Latinos Salud. 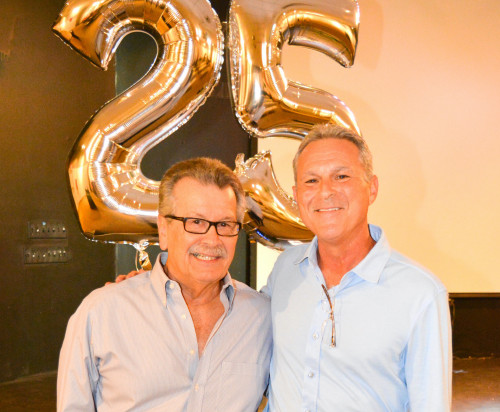 “The grants we provide are to those who might not otherwise have an avenue of funding,” said executive director Ken Rapkin in the release. “It’s seed money that often allows researchers to begin to prove their hypothesis and go on to obtain even further, and much greater, funding from larger organizations.”

Recipients of Holiday Hugs use the money to provide a variety of needed services, ranging from housing and food to transportation and HIV testing. The Campbell Foundation has also provided financial relief during emergencies and natural disasters, such as hurricanes and floods.

The anniversary celebration took place at ArtServe in Fort Lauderdale. In his keynote address, Mario Stevenson, PhD, of the University of Miami School of Medicine, presented the audience with a general summary of HIV/AIDS in Southern Florida, including updates on research and prevention.

Based in Fort Lauderdale, the foundation was launched by Richard Campbell Zahn, a chemist who developed a treatment for fever blisters, chapped lips and cold sores called Herpecin-L Lip Balm that’s still sold today. Zahn died of AIDS-related complications in 1995, and, per his wishes, proceeds from the sale of his company were used to set up the foundation as a way to support research into the treatment and prevention of HIV and its related illnesses.

For the examples of POZ articles about the foundation, see “11 HIV Groups in Florida Receive ‘Holiday Hugs’ Totaling $25K,” “What Is BG18, and Can It Lead Us to an HIV Vaccine?” and “What Role Does Lymph Node Scarring Play in the Body’s Fight Against HIV?”