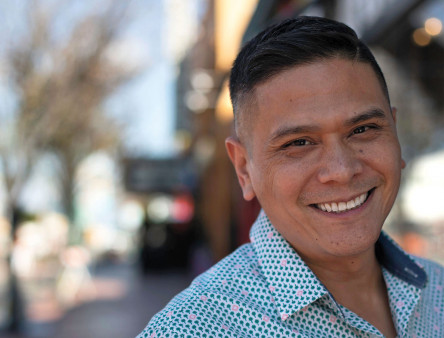 Andrew Spieldenner works to center the voices of people with HIV.

As a professor at California State University San Marcos, Andrew Spieldenner, PhD, begins every semester by telling his students that he is a gay man of color living with HIV. Spieldenner’s confidence to speak his truth dates back to when he first came out to his family as a young adult.

For Spieldenner, sharing his sexual orientation was easier than sharing his HIV status. But eventually, he became empowered enough to disclose his status, and he has never turned back.

“I was one of those gay men who worked in HIV as an HIV-negative person and then seroconverted and had to make adjustments with my identity,” says Spieldenner, an advocate who lives in San Diego. His diagnosis in the late ’90s was met with criticism from people who told him he should be ashamed and should quit the HIV field.

Instead, Spieldenner doubled down. He has now been working to help people living with HIV for nearly 30 years, including through senior-level stints at the Latino Commission on AIDS, the Black AIDS Institute and the New York City health department.

“When I became a part of the people living with HIV community, I really understood how some rooms were built to exclude us, and that’s done purposefully,” he says. “As the epidemic has gone on, I’ve noticed that our voices have become less important to organizations.”

Spieldenner is passionate about centering and expanding the voices of the LGBT community and people living with HIV. He’s been deliberate about ensuring that his workplaces are inclusive, and that includes focusing his expertise on another issue: race.

“Race-based work is super important,” Spieldenner says. “In the United States, we should be looking at HIV through a racial justice lens.”

As vice chair of the U.S. People Living with HIV Caucus, which is known for its advocacy work, notably the lobbying event AIDSWatch, he represents the group in different capacities, such as serving as a North American delegate to the Joint United Nations Programme on HIV/AIDS (UNAIDS).

“We’re really trying to push the meaningful involvement of people with HIV,” he explains. As cochair of the strategic advocacy committee, he works on policy projects that address HIV criminalization and surveillance, among other topics.

Since 2012, Spieldenner has taught LGBT studies at the college level. He believes such courses help students explore identity and learn about different ways of existing in the world.

“Gender identity keeps on changing, adapting and advancing,” he says. “Providing spaces for students to be able to discuss that is super important, especially at the stage of development they’re in.”

Spieldenner enjoys bringing less visible communities to the heart of discussions, and he doesn’t see his love for that changing. In fact, he has recently become more involved with, and has taken many lessons away from, the disability community.