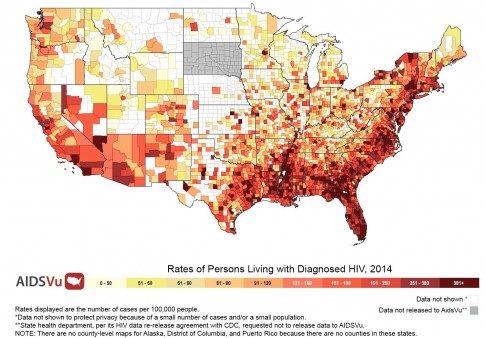 Click on These U.S. Maps to Find HIV Rates in Your City, County and State

The updated AIDSVu maps illustrate that where you live influences your HIV risk.

Updated interactive maps by AIDSVu break down HIV data by city, county and state as well as by different demographic groups. The maps illustrate that where you live makes a big difference in terms of your HIV risk.

Nearly two thirds of all new HIV diagnoses in 2015 occurred in 2.5 percent of U.S. counties. And the five cities with the highest rates of new diagnoses are located in the South: Miami, Florida; Jackson, Mississippi; New Orleans, Louisiana; Baton Rouge, Louisiana; and Atlanta, Georgia.

Patrick Sullivan, MD, of Emory University and principal investigator of AIDSVu, said the maps tell the story of the long-term disproportionate impact of HIV in the South and the areas where new patterns of transmission are emerging.

The information presented by AIDSVu is important, Sullivan said, because “using local data will allow policymakers and researchers to stay aligned with the realities of where HIV is entrenched and where it is emerging, to strengthen surveillance and to provide responsive prevention strategies to mitigate these serious risks.”

Now in its seventh year, AIDSVu is a project of Emory University’s Rollins School of Public Health in partnership with Gilead Sciences. Check out the interactive maps and the related information here.