The Ties That Bind Us

The women below were profiled in an article titled “Empowering Entrepreneurs” in the March 2014 issue of POZ. Click here to read that article, which spotlights their Common Threads microenterprise. 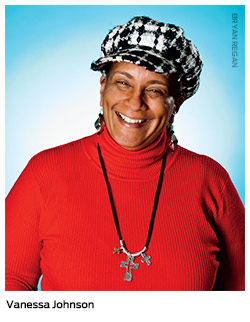 Vanessa Johnson, creator of Common Threads and the Microenterprise
(ME) Circle
Washington, DC

When Vanessa Johnson was diagnosed with HIV in 1990 in Albany, New York, she had to work hard just to convince her doctors that she, a heterosexual woman with a prestigious law degree, could even be infected. Johnson was no stranger to the virus; ironically, before law school she worked for the New York State Department of Health, one of the first responders to the HIV epidemic. After a tough time dealing with the death-sentence diagnosis doctors gave to HIV-positive people at the time, Johnson knew she had to use her skills to fight back. For the past three decades, she’s been a housing advocate, group home leader, and community outreach coordinator in both her hometown of Albany and in Washington, DC, where she moved to pursue her career in HIV policy and activism. She’s helped found a number of HIV/AIDS organizations, including the Capital District African American Coalition on AIDS, Catch a Rising Star, Saving our Sisters and the U.S. chapter of the Positive Women’s Network (PWN-USA). Today, Johnson serves as the director of Ribbon Consulting Group, which provides consultation and technical assistance to organizations and communities addressing a variety of health and social disparities. She is also looking for more funding for Common Threads trainings, and she is searching for more activists to teach that program at HIV/AIDS community organizations across the country.

“There’s never just one program that is going to reach everybody,” Johnson says. “And there’s not just one format for advocacy or activism. We have to figure out a continuum that really works for this community, because all of us are in different venues, at different spots in our development as people dealing with this disease.” 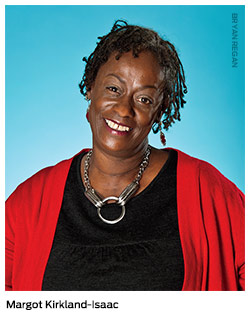 Margot Kirkland got involved with Common Threads while working as Vanessa Johnson’s assistant at the now-defunct National Association for People With AIDS (NAPWA). She was already in the midst of HIV/AIDS work and activism but unsure of how to tell her own story about living with the virus. Since joining the sisterhood, she’s developed into a fierce storytelling advocate. In 2006, Kirkland was invited by the Bush Administration to South Africa to speak and work for mothers2mothers, a program that trains, employs and empowers mothers living with HIV. She is also currently on the board of directors for the North American chapter of the Global Network of People Living with HIV (GNP+) and is pursuing work with the International Community of Women with HIV/AIDS (ICW). Currently, Kirkland coordinates trainings for providers through the DC Care Consortium, and she travels frequently for her life’s work in international HIV/AIDS advocacy.

“I never thought I’d have the opportunities that I’ve had, or travel to the places I’ve travelled to,” says Kirkland of her 22 years of HIV work. “It’s been incredible.” 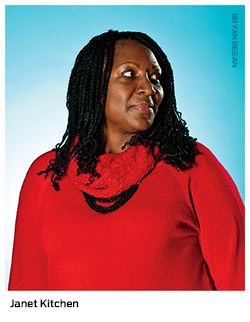 It took only three years for Janet Kitchen to move from learning her HIV diagnosis to becoming a member of Common Threads’ network of female activists. But even before joining the sisterhood, Kitchen had already begun a booming career in the HIV/AIDS field. In 2010, she founded Positively-U at the University of South Florida, a program that provides a broad range of prevention, education, support and outreach services to young people in her community. Today, she’s a mental health counselor and an advocate devoted to removing barriers to care and combating high drug prices for people living with the virus. She is currently a consultant with the AIDS Healthcare Foundation and is also looking to pursue a doctorate degree in health and public policy. Kitchen’s desire to break down barriers to care was what originally got her involved in advocacy, and she looks forward to helping other HIV-positive people get the care they need and deserve.

“Women aren’t really coming forward to speak out on how to get things done,” Kitchen says. “The main thing I like about Common Threads is that it’s specific to us. And that’s empowering.”

Lepena Powell-Reid has been a warrior against HIV since the early days of the epidemic. After watching countless friends pass away throughout the ’80s and ’90s, in the midst of her own positive diagnosis, she knew she had to fight back. But it wasn’t until recently that she opened up to advocating specifically for women living with the virus—and for herself. Today, she is involved with Tampa Bay’s Sexual Violence Task Force and is also an avid author and poet who writes about HIV and sexual abuse. When she attends AIDS conferences with Common Threads, Powell-Reid contributes by selling her book about the virus, Angels in Divine Service, and displaying her writings and poems to help empower other HIV-positive women. In 2012, she was honored as SisterLove’s 2020 Leading Women’s Society in Atlanta. Today, she’s a member of the Positive Women’s Network and continues to advocate for those in her community living with and at risk of HIV.

“Women have been diagnosed since the early stages [of the epidemic], but a lot of women just felt that it was not an issue,” Powell-Reid says. “To this day, many women still believe that.” 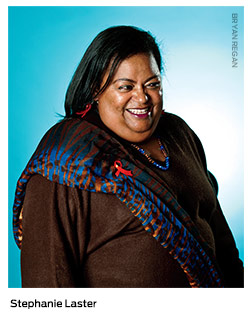 Stephanie Laster started advocating for people living with HIV in 2002, nearly five years after her positive diagnosis. Before then, she’d just been attending the doctor and taking care of herself, but workshops and community outreach efforts like Common Threads have helped her become the powerful, busy advocate she is today. Laster is active on the Ryan White Planning Council for the Metropolitan Atlanta Health Group, and also works part-time helping with SisterLove’s prevention, education, testing and workshop efforts. It was here that she founded Divas in Action, a jewelry-making program for Atlanta women that mirrors the Common Threads initiative. The master crafter is also a facilitator for the NAMES project, which teaches people how to make panels for the AIDS Memorial Quilt. In between all of her activism, Laster also finds the time to go to local prisons to speak about HIV prevention with women getting out of jail. And, she is also big into selling jewelry.

“Common Threads puts a face on HIV and helps people become more open,” says Laster, who now has her own team of jewelry-making entrepreneurs in Atlanta. “Not only are they doing the education, but they’re doing something that is able to put a bit of change in their pockets.”

Patricia Kelly, 2009 graduate and trainer for the ME Circle
Orangeburg, SC

Patricia Kelly first saw parts of the Common Threads training when she was working with AIDS Alliance at the annual VOICES conference. After talking to Johnson and working her connections in the HIV/AIDS community, Kelly brought the program to Orangeburg, South Carolina, for the first time. Since then, she’s been an integral player in transforming what was a simple storytelling workshop into a sustainable crafting collective of women living with HIV, making Orangeburg the crown of Common Threads. Today, Kelly works hard pursuing the third stage of the program—the goal of sending advocates out into the world—by staying involved in a wide array of community organizations. The 28-year veteran of the virus is a member of the South Carolina Task Force on HIV/AIDS, one of the founding members of PWN, and a steering committee member of the People Living with HIV (PLHIV) national caucus. In addition, Kelly is the director of A Family Affair, a support group and community outreach organization for HIV-positive people that is currently applying for its 501c3 status. Look for her at the 20th International AIDS Conference in Australia this July, where she will be selling Common Threads’ jewelry at the event’s Global Village.

“It took a support group to get my life back on track, because I thought I was going to die tomorrow,” Kelly recalls. “But then a couple of years later, I’m like, ‘I’m still here, and I ain’t never been sick.’”

Sharon DeCuir started advocating for HIV after her support group was scheduled to loose funding, leaving HIV-positive women like her in Baton Rouge scrambling for services. DeCuir understands the importance of a close community in improving the health and lives of people living with the virus. In 2010, shortly after receiving Common Threads training, DeCuir decided that her purpose in HIV activism would be specifically to help women living with HIV. To do this, DeCuir has been involved with the Campaign to End AIDS, PWN-USA, and was appointed to the Louisiana Governor’s Commission on HIV, AIDS and Hepatitis C. She is actively involved in SASI which has a focus on addressing health disparities in the South and to address HIV rates and treatment for women in the South. In 2012, she helped plan and host the second annual Women’s HIV/AIDS Advocacy and Leadership Summit. DeCuir is a professional in the HIV/AIDS field too, and currently works as the prevention program coordinator for the HIV/AIDS Alliance for Region Two (HAART) in Louisiana, where she leads the effort for HIV testing, counseling and behavior modification efforts in her community.

“When I was diagnosed, I had the thoughts that nobody would ever want me, thinking I was going to die, I found out that there were several other women who feel that same way,” DeCuir recalls. “We need more programs that help women get from diagnosis to stability, and Common Threads definitely does that.”