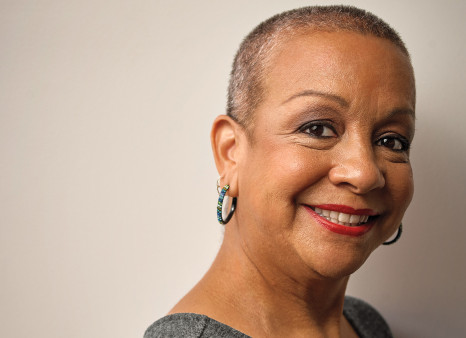 Krishna Stone was one of more than 4,500 walkers at the first annual AIDS Walk New York in 1986. The historic fundraising event would mark the beginning of Stone’s long relationship with the world’s first provider of HIV prevention, care and advocacy.

“The catalyst for me was the deaths of people I knew and loved,” says Stone, 59, an HIV-negative advocate who has been employed at Gay Men’s Health Crisis (GMHC) for 25 years.

“I remember arriving at Lincoln Center [for the AIDS Walk] and just being awed by the number of people who had shown up.”

Stone began to volunteer with GMHC soon thereafter. She helped folks sign up for the AIDS Walk, was involved in GMHC’s first AIDS Dance-a-Thon and even distributed condoms at subway stations.

In 1992, she became a full-time consultant with the volunteer department and was hired as assistant coordinator of outreach the next year.

Fifteen years ago, she was recruited to join GMHC’s communications department. She was promoted to assistant director of community relations three years later.

“I understood what it meant to work with the media, especially coming from the home of two journalists,” Stone says. “I learned more about communications work, took workshops and just kept building my skills.”

Although she has planned countless events for GMHC, one of her favorites was the demonstration “We’re Not Dolls! Don’t Play With Women’s Lives!” for National Women and Girls HIV/AIDS Awareness Day in 2009.

“We were able to get people to bring a ton of dolls,” Stone remembers. “We put them on the steps of New York City Hall.” The dolls represented women and girls living with or affected by HIV.

Stone’s commitment hasn’t gone unnoticed. Four years ago, she received an award from the city’s health department for her outstanding dedication to combating the spread of HIV.

In 2017, she received a proclamation from Governor Andrew Cuomo for her dedicated service and continuing contributions to New York state.

“It’s overwhelming to know that I’ve been doing this work for a quarter of a century,” says Stone, who has no desire to retire. “It’s an honor to work at GMHC. It’s an honor to be celebrated.”