Detail from the cover of the new global AIDS strategy Courtesy of UNAIDS.org

The UNAIDS global AIDS strategy for the next five years requires $29 billion annually and sets these goals.

The Joint United Nations Programme on AIDS (UNAIDS) has released a new global AIDS strategy for the next five years. The plan sets targets and lays out policies that will not only help end AIDS as a global health threat by 2030 but also get those efforts back on track after the setbacks posed by the COVID-19 pandemic. What’s more, the plan focuses on health equity by taking aim at the inequalities that fuel the HIV/AIDS epidemic.

For the strategy to succeed, it will cost an estimated $29 billion a year, according to a press release on the report by UNAIDS.

The new #GlobalAIDSStrategy puts people at the centre of the response and aims to unite countries, communities and partners to take prioritized actions to ensure that all people affected by HIV have access to life-saving HIV services.#EndInequalitiesEndAIDS

“Most countries and communities are not on track to end AIDS by 2030,” states the strategy’s executive summary, adding, “Ending AIDS is possible, but a course correction is needed.

“Much progress has been made among some groups of people and in some parts of the world,” according to the summary. “A few countries have reached AIDS epidemic control, and others are close to doing so. By 2019, more than 40 countries had surpassed or were within reach of the key epidemiological milestone towards ending AIDS. Millions of people living with HIV now enjoy long and healthy lives, and the number of new HIV infections and AIDS-related deaths are on the decline. Of the 38 million people living with HIV, 26 million were accessing lifesaving antiretroviral therapy (ART) as of June 2020. This treatment results in viral load suppression, which prevents the spread of HIV.” 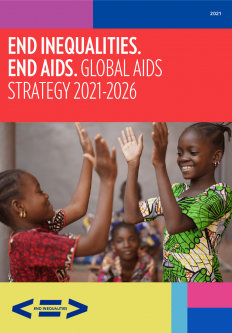 The cover of the new global AIDS strategyCourtesy of UNAIDS.org

The report refers to a fact known as Untransmittable Equals Untransmittable, or U=U, which means that people living with HIV who maintain an undetectable viral load by taking meds not only enjoy healthier and longer lives but also cannot transmit the virus through sex.

The main priorities of the new UNAIDS five-year strategy are:

“This year marks 40 years since the first cases of AIDS were reported and 25 years since the establishment of UNAIDS,” said Winnie Byanyima, executive director of UNAIDS in the press release. “We are at a critical moment in our historic effort to end AIDS.” “Like HIV before it, COVID-19 has shown that inequality kills. COVID-19 has widened existing inequalities that block progress to ending AIDS. That’s why I’m proud that our new strategy places tackling inequalities at its heart. We must seize this moment to ensure health equality for all in order to beat COVID-19 and end AIDS.”

The World Health Organization and the Global Network of People Living with HIV have endorsed the UNAIDS strategy.

Achieving the goals and targets of the new #GlobalAIDSStrategy will require annual HIV investments in low- and middle-income countries to rise to a peak of US$29 billion by 2025.

In related news, see “United Nations General Assembly to Hold a High-Level Meeting on HIV/AIDS.” Additionally, during the past year, UNAIDS released a number of reports looking at COVID-19 through the lens of HIV. For POZ articles on those reports see:

In other global HIV news, Andrew Spieldenner, PhD, is the new executive director of MPact Global Action for Gay Men’s Health and Rights.