Charles Stephens founded the group out of frustration. He did not like how Black gay men were represented in mass media and culture.

“The messages you see from the media, and even among AIDS service organizations and our own leaders, often represent gay Black men as pathological, as being disempowered, as being to blame for the social violence we experience,” Stephens explains.

“For example, today in public health, there are narratives that suggest the reason why we have poor health outcomes isn’t because of the failure of institutions. The narrative blames Black gay men. It asks why we aren’t doing enough or going to the doctor, that sort of thing.”

“The other very dangerous narrative I noticed about Black gay men is that we don’t have a history and culture,” Stephens continues.

“That isn’t true. So much of the history of the HIV movement is about the courage of Black gay men, but our contribution to this history is not represented very often. With all the interest in HIV history, how many people can name or point to the contributions of Black gay men? It has everything to do with racism, really.

“To ‘counter the narrative’ means to counter false, proliferating narratives and to be the author of our own stories. All these message that circulate about us have political consequences in our lives. Engagement in those narratives is a political act.”

It was with this mission in mind that Stephens founded the Counter Narrative Project in 2014. It is a national organization based in Atlanta, with a lean staff that includes Stephens as the executive director, a director of mobilization, and a special projects person. “We have a number of community partners and a powerful national network that supports our mission,” Stephens says.

The first activity the Counter Narrative Project launched was a webinar about Black gay men in the south, co-sponsored by the HIV Prevention Justice Alliance. The webinar was filled to capacity, telling Stephens they had touched a real need.

“I had never seen Black gay men discussed in the way we addressed it,” Stephens says, “and I believed there were Black gay men and our allies looking for some kind of platform to share. That’s when I knew we were on to something.”

Stephens positioned the Counter Narrative Project as an organization with expert opinions about how Black gay men were presented and viewed in the HIV arena. In June of 2014, they released a statement on National HIV Testing Day that challenged the way in which Black gay men were perceived. 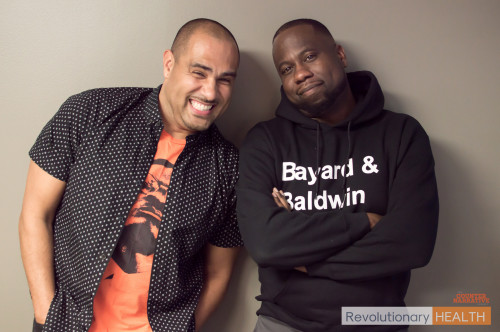 “We asked in that statement that more attention be paid to the structural barriers to HIV testing. We also called for more centering on the stories of our experiences. Too often, the story of Black gay men is told through statistics.” Rather than being seen as numbers — the rates of transmission, the amount of HIV tests done — Stephens demanded that stories of Black gay take center stage for the national day.

“We called for our own voices to be heard,” Stephens says. “We should be the author of our own narratives. From there, we were off to the races.”

A well-regarded academic and Black community leader, Stephens draws upon the legacies of literary and cultural artists who paved the way for Black gay men.

“The blueprint has been set for us to follow,” Stephens says. He points to Black artists like Marlon Riggs and Essex Hemphill, who lifted up and celebrated Black gay men, their sexuality, and even their lives with HIV.

“Marlon’s film Tongues Untied saved our lives,” Stephens insists. “The poetry of Essex Hemphill saved our lives. So much of the programmatic work for Black gay men is rooted in deficit, in fear, in sadness. What would it mean to do programmatic work focused on joy, centered in resilience? What happens when you have an organization built on that foundation, around the things that we have claimed as sacred and empowering to us?”

Indeed, the Counter Narrative Project bolsters narratives around Black gay men by providing programs and opportunities to share stories, including an ongoing blog, special events, and a video series, Revolutionary Health, which won Best Video Series in the 2018 POZ Awards.

“We are unique,” Stephens says, “because we are not only engaged in advocacy. We are content creators, and that harnesses the power of our community and inspires activism.”

“We want to empower folks to navigate institutions,” Stephens adds. “One of the most important things we have done is ask to hold clinicians accountable, for them to ask about sexuality and sexual health in way that isn’t shaming, to be culturally competent. I don’t think it is a radical thing that health providers should see the humanity of their patients. That’s all we’re asking, but so many are unable to see the dignity and humanity of Black gay men.”

The Revolutionary Health video series embodies the kind of sex-positivity and joy that Stephens believes is missing from the landscape. “We wanted to create a space where we can talk about the health of Black gay men from a more holistic place,” Stephens says. “So many of the messages today don’t speak to our hearts and minds. We wanted to talk about health in a radical way and have candid conversations that really aren’t held anywhere else.”

Stephens points to a recent show on the racism inherent in health care, and another about sexuality that served to destigmatize it. He credits Atlanta physician David Malebranche, MD, with suggesting the concept for Revolutionary Health and agreeing to serve as one of the show’s regular hosts.

“We’ve had a show about music, testicular cancer, depression and even a show on yoga where we actually did yoga,” Stephens says. Another episode about physical exams included an actual physical. Topics of sex have included guests like an adult entertainer and a leather daddy, who brought along a trove of sex toys.

“We believe in treating all our guests with dignity and humanity,” Stephens says. “We believe all Black gay men have value. I love having different perspectives and points of view.”

For more information about the Counter Narrative Project, click here.