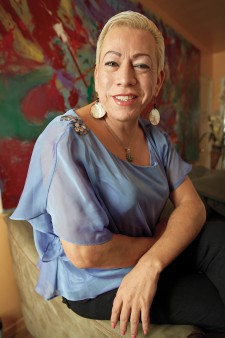 Bamby Salcedo is a long-term survivor of HIV who has been working in AIDS advocacy for the past 15 years. She is also one of the United States’ foremost grassroots transgender activists.

You may recognize Salcedo from the OUT 100 list. You may also recognize her from the myriad keynote speeches she has given; from TransVisible, the award-winning documentary that was recently made about her life; or from the community organizations she has been involved in, including the National LGBTQ Task Force, The Latino Equality Alliance, AIDS United and others.

“It is important that we as trans individuals and as a community grasp the power that we have,” says Salcedo, who recently left her longtime job as the health education and HIV prevention services coordinator at the Children’s Hospital of Los Angeles to go full-time with her activism.

Salcedo effected change in a variety of ways over the past year. Like in September, when she and other trans activists and allies stormed the stage at the United States Conference on AIDS, shouting “trans lives matter” to bring attention to disparities in the National HIV/AIDS Strategy. Or when, as a result, she was invited to the White House Office of National AIDS Policy to address the lack of trans leadership in the HIV community.

One of the major issues she hopes to address in her new role is the structural violence against trans people in the United States. “For instance, the fact that trans women continue to be categorized with men who have sex with men, when we are not,” Salcedo explains. “[Or] the pathologizing of our community, or the fact that there are still no federal discrimination protections against trans people looking for work.”

As a former sex worker, inmate and homeless youth who spent years in the street economy, she is acutely aware of the social determinants that make trans women nearly 49 times more likely to get HIV than other women. “We are pushed in many ways to put ourselves at risk,” she explains.

Salcedo is also at the forefront of Latino-led activism. Through the TransLatin@ Coalition, Salcedo helps push immigration reform for trans individuals in the United States, calls out the inhumane treatment that trans people receive in U.S. detention facilities, and works to address a variety of other health and systematic disparities that affect trans immigrants like her. This year, she also hopes to work with the TransLatin@ Coalition to help launch Los Angeles’s first violence prevention center for trans women.

“We have to create the changes that need to happen in our society to get to a place where we, as a community and as individuals, are dignified,” Salcedo says. “We are not in a position to be waiting for things to happen or for people to leave us on the backburner. We are in a state of emergency, and we will be heard.”