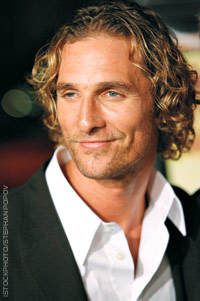 Matthew McConaughey has morphed from studly stripper to scary skinny to play real-life Texan Ron Woodroof, the rebellious figure who started The Dallas Buyer’s Club (also the film’s title) and who died of AIDS in 1992. While this dramatic weight loss may garner much publicity, the movie is sure to bring attention to a little-known aspect of the epidemic: buyers’ clubs. Before the advent of modern antiretrovirals in 1996, so-called buyers’ clubs sprung up as a way to provide HIV-positive people with experimental treatments not approved by the FDA. Woodroof, a homophobic electrician who contracted the virus through drug use, smuggled illegal meds from as far away as Japan then distributed them along an underground network. According to The Hollywood Reporter, Gael Garcia Bernal costars as a club member and filming was slated to start this fall. Will Oscar be far behind?