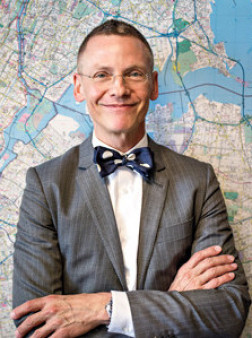 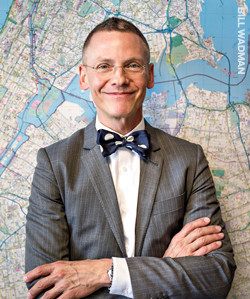 In May, Daniel Tietz was appointed as Chief Special Services Officer at the Human Resources Administration (HRA) in New York City. In his new role, Tietz oversees a broad range of programs that provide assistance to the city’s most vulnerable residents.

The LGBT and HIV/AIDS activist brings years of experience to the agency, having previously served as the executive director of ACRIA (AIDS Community Research Initiative of America) for eight years.

A long-time advocate for social justice, Tietz shares with POZ his vision for ending the epidemic in the city, as well as how he plans to improve the lives of New Yorkers by improving the vital services offered by the HRA.

Tell us about your new role at the HRA.
Prior to Steve Banks being named commissioner of the HRA, there were a couple dozen folks with the title executive deputy commissioner who reported to the commissioner, and I think Steve realized it was a bit unwieldy. Now there’s a chief program officer who oversees benefits like public assistance, Medicaid and food stamps. I oversee things that could be described as services that the HRA actually does for New Yorkers and that are delivered directly. These include domestic violence and adult protective services, as well as the HIV/AIDS Services Administration (HASA), which is part of the customized assistance services at HRA.

How does your experience help you in your new role?
I have a long history with Banks, as well as with Mayor Bill de Blasio. I was Banks’s campaign manager in 2001 when he ran for city council in the 39th district. [Banks narrowly lost to de Blasio.] There is no one that I intuitively share views with more than Banks. We see folks in this town and beyond who need a host of support and services to have a better quality of life. The bulk of the folks who are served by HASA have challenges in their lives beyond HIV, such as housing-related or employment-related issues or substance abuse or mental health challenges. HIV is just one bit of the story and often times the other needs are very complex. For the last 20 years, the past administrations, from Bloomberg to Giuliani, found ways to say no and found ways to limit access and turn people away. I don’t think that’s what we have in mind.

After years of advocacy, the 30 percent rent cap for low-income people with HIV/AIDS receiving rental assistance has finally passed. How will you play a role in moving this and other policies?
One of the challenges playing out between city and state governments is that there are very limited things the city can do all by itself without state approval or state money. For example, I understand there’s a push to get HASA expanded to those beyond a narrow AIDS diagnosis. That’s a state regulatory issue, and it’s not within the city’s control. If the mayor, commissioner and I all agree on something, then we’ll need to persuade Albany to go along. We are committed to doing that, which is a good shift for this administration.

The 30 percent rent cap is already a big shift because it means that folks are no longer at risk of losing their housing because they can’t afford their rent. And some folks in supportive housing can now afford to live in an apartment in their community. This frees up supportive housing beds for folks who actually need them. So just that one thing makes a huge difference for those getting services from HASA.

There are a lot of shared views and a lot of shared energy in terms of the things we need to do in New York City to make a genuine and positive difference and to eliminate some of the harsher elements that seemed designed to keep people from receiving benefits and support, which they both need and are eligible for. There is a willingness to have a back and forth with folks working within the HIV community and taking hints from them about where to go from here. I think the reason for having me at HRA is to have those conversations and to find ways to work together and effectively make a difference for people living with HIV.

Are we heading to the larger goal of trying to end the epidemic in the city?
Absolutely. It looks as though the 2012 preliminary numbers from the Department of Health have new diagnoses below 3,000 per year for the first time in New York State. The state’s estimates for people with HIV with undetectable viral loads who are engaged in care are about half. Ending the epidemic is entirely doable. We know how to prevent HIV, so it’s just a matter of scaling up and doing all of those things statewide and targeting the most intensive services and the most intensive case management to the communities most at risk and where the need is greatest. The science is there.

I think New York State, which has the biggest epidemic in the country, and New York City, which comprises 80 percent of that epidemic, are already doing the right things toward ending the epidemic. It’s a matter of getting additional resources. We need to target the work in smarter ways to get the job done.

Your testimony for the Older Americans Act (OAA) supported an effort to include HIV-positive and LGBT people as those with greater social needs. Can you explain how this would benefit people around the country, but also in New York?
Last September, there was a hearing at the U.S. Senate Aging Committee, and I was invited to testify along with Ronald Valdiserri from the Department of Health and Human Services and a couple of others. The United Nations currently only has an official count and data collection on people with HIV around the globe up to age 49. Our argument has been that if you really intend to get the goal of 15 million on treatment by 2015 then by definition those 15 million people are going to live. They are going to get old.

We already know that older people with HIV have more health conditions than that of their peers and that those conditions are worse and happen sooner. I think what it means in practice and certainly for the HRA is that people need support and services with regard to their other health conditions, some of which have implications for their employability, physical functioning, etc.

The OAA actually expired a year before the Ryan White CARE Act did. But like Ryan White, so long as Congress funds it, it still operates. There is money there, but they are operating off the old set of priorities.

There are a couple of billion dollars annually that Congress puts toward the OAA. It mostly gets funneled to county-based area agencies on aging in all 50 states. A chunk of that money goes for food, but it also goes for other services. In relative terms per capita, it’s not a lot of money and most programs don’t get a lot of money per person being served. The agencies pay attention to the populations and the needs that are outlined in the OAA. If you’re not listed in the OAA, then most programs are not going to do anything in particular for you. This is an effort to get the programs for senior services to specifically pay attention and be compelled to report on what they are doing for populations with the greatest needs. We want to see LGBT folks and HIV-positive folks included in the OAA list.

How did you get into HIV/AIDS work, and what keeps you motivated now?
I started as a nurse, and I worked principally—but not exclusively—in mental health. I care about these issues, and I care about social justice and equality. Government has a role to help those who need something in a communal way. I saw that as a kid. I saw my folks, who were not well off, giving to other folks who had less. I’m also a gay man of a certain age who was a nurse at the beginning of the epidemic. I knew lots of people who died, so it matters to me.

Now, I need to keep engaging in what matters to me in new and different ways. I think it’s my opportunity to grow and to find new ways to make a difference.