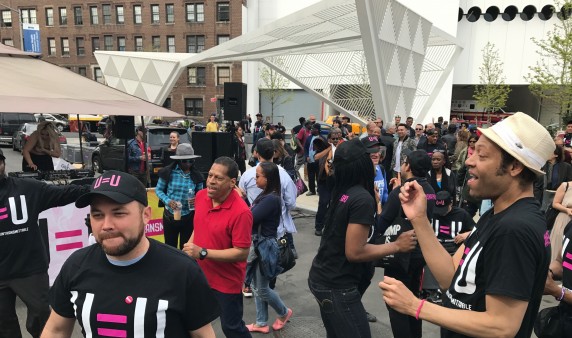 A rally and dance party was held at the New York City AIDS Memorial on April 23. The event aimed to support the “Undetectable = Untransmittable” (U=U) campaign and to celebrate the public release of the End AIDS NY 2020 Community Coalition’s Statement on Viral Load Suppression.

The rally/dance was a joint effort of the coalition and the New York City Department of Health and Mental Hygiene. According to a press release about the event, the coalition’s statement has been endorsed by more than 80 organizations.

You can read the full consensus statement on the Housing Works blog here. It reads, in part:

The New York State End AIDS 2020 Community Coalition joins national and international HIV experts to affirm the now conclusive scientific evidence that people with HIV who are on antiretroviral treatment (ART) that suppresses the virus to an “undetectable” level not only successfully protect their own health but cannot transmit HIV to others. In short, undetectable status equals untransmittable status, and public education and messaging about HIV should be updated to promote and reflect this reality.

The incontrovertible evidence that HIV cannot be sexually transmitted if one is durably virally suppressed is something that we all celebrate as a key milestone in ending AIDS as an epidemic:

The U=U campaign referred to in the New York statement is the work of the Prevention Access Campaign (PAC). That group has released its own consensus statement, which is garnering global support. That statement reads:

People living with HIV on ART with an undetectable viral load in their blood have a negligible risk of sexual transmission of HIV. Depending on the drugs employed it may take as long as six months for the viral load to become undetectable. Continued and reliable HIV suppression requires selection of appropriate agents and excellent adherence to treatment. HIV viral suppression should be monitored to assure both personal health and public health benefits.

The PAC statement notes that negligible means “so small or unimportant as to be not worth considering; insignificant.”

The New York coalition’s statement “enthusiastically supports” the U=U campaign and calls for the following steps:

“Durable viral suppression is the most powerful tool in the HIV prevention toolkit,” said Demetre Daskalakis, MD, of the New York City health department (and the DJ at the dance party), in the press release. “The resilient people living with HIV who adhere to their regimens and get and keep their viral load suppressed are responsible for driving down the number of new infections in our jurisdiction to historic lows. Keeping themselves healthy means ending the possibility of sexual transmission of HIV. When status becomes irrelevant, stigma will disappear. We will create a future that is status neutral. The data support it, and so do we.”