The director of a new documentary shares why he focused on aging with HIV/AIDS.

When I first starting working on the feature length documentary Desert Migration, I considered it a small project, something I’d do on the weekends to keep myself creatively active. It was intended to be an intimate oral history of the lives of certain men in Palm Springs, California, men who had lived through the AIDS crisis and had subsequently moved to the desert to “retire.” I was interested in the idea of what happens when you are told, repeatedly, that you are going to die. You watch all of your friends die and you wait for your own death, but then it doesn’t happen and you realize that what you were told was wrong. You’re not dying. At least, not in the foreseeable future. So, now what?

When I started to interview people, I was surprised by their honesty and their need to talk. What I thought would be a straightforward interview became a much-needed catharsis. My interview technique can kindly be described as “casual,” but what these men appreciated was that I wasn’t critiquing them, I wasn’t evaluating, I was simply listening. 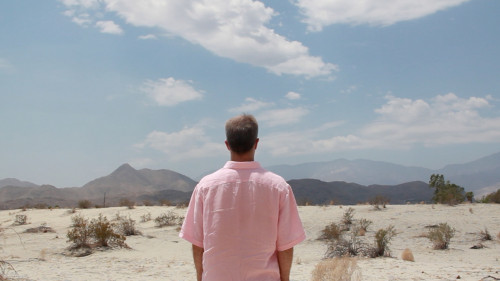 I always intended Desert Migration to be a first person experience. Every piece of knowledge imparted is personally biased, coming directly from those who have lived it. It’s not objective, and it doesn’t pretend to be. We all experience the world in different ways, and we all experience HIV in different ways. The film weaves together the different perspectives of these people to create an ocean of experience that illuminates our own lives, through contrast, contradiction or concurrence. As I researched the film, I realized there is a national, and global, zeitgeist emerging around the subject of aging with HIV/AIDS, a conversation that is growing louder and louder, and Desert Migration may well be the first feature documentary on the topic.

If there was an alternate title to the film, it could be We ARE Here, a variation on the title of another powerful HIV documentary titled We Were Here. We are here. We never went away. We thought we were going to, but we didn't. We lived, and we still live. The quality of our lives varies, but it does continue. It’s our responsibility to determine what we do with this time. We are not dead, although to many we have been forgotten. It’s a sad fact that happens to almost everyone as they get older. The fleeting but deafening noise of youth clamours for attention, and everything else gets pushed to the side. In the light of a crisis that has been taken off the boil but is still simmering along, a dismissive attitude is even more alarming.

From my observations, HIV is now regarded as easily treatable, something people in the 1980s died from. Yes, the AIDS crisis was horrible, but that’s over now, right? Only people in Third World countries die of AIDS? Anyone who is reading this will know that the only easy part of being HIV positive is the act of swallowing a single pill. But try swallowing handfuls of pills, day in, day out. Try dealing with the side effects, too numerous and amorphous to coherently categorize when combined with the complications of aging. Everyone experiences deterioration of the body as they age, but this is clearly accelerated by HIV and medications designed to suppress it. This first generation of people to grow old with HIV are essentially test subjects. We need to see what happens to them, how they deal with it, and what we can do to support them and the future generations of HIV-positive people, until the virus is eradicated. This is why it is important that their voices are heard, and their stories taken seriously. I look forward to sharing them with you.

Daniel F. Cardone is the director and producer of the documentary Desert Migration. Marc Smolowitz, co-founder of The HIV Story Project, also is a producer of the film. The first round of production took place in October 2013, but they are still raising funds for the next round, which is slated to begin in March 2014. To contribute to their Indiegogo campaign, click here.