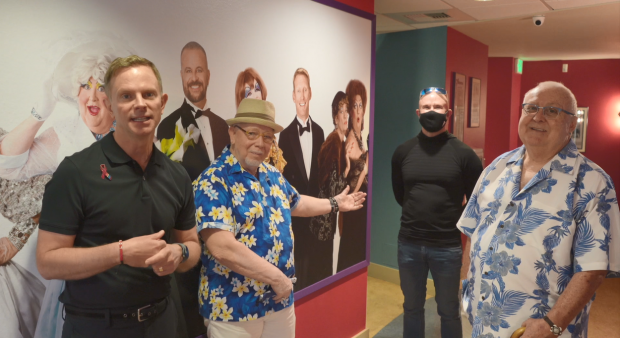 Honoring the fundraising efforts of a drag troupe

Earlier this year, the Desert AIDS Project (DAP)—an advocacy-based health center in Palm Springs, California—officially updated its name to DAP Health. Like many other AIDS service organizations that have had to redefine their evolving role in their clients’ overall health care, the name change more clearly conveys the work DAP is doing today while honoring the group’s 36-year legacy over the past 36 years.

“We heard the community clearly when they told us that it was time for a name change, but the history of DAP should not be forgotten in the process,” explains David Brinkman, the CEO of DAP Health. “This insight was key to keeping ‘DAP’ in our new name, allowing us to step boldly into the future while honoring our past.”

This month, DAP Health honored that past when it unveiled a new lobby in the Barbara Keller Love Building (watch video above). Clients and visitors arriving at DAP Health’s Wellness Wing will experience a space that has been transformed with warm colors, vintage cabaret posters and a life-size photographic mural of the drag troupe Les Dames du Soleil. The decor pays homage to the fine art of drag, comedy and humanitarianism and serves as a reminder of the Coachella Valley’s rich history of community fundraising and inclusivity.

For 30 years, Les Dames du Soleil helped raise funds to provide access to health care in the Coachella Valley. Created by Douglas Woodmansee and Marshall Pearcy, life partners since 1976, Les Dames du Soleil brought people out of their shells through laughter. With a revolving cast throughout the years, the troupe helped draw much-needed funding to DAP, giving people living with HIV a chance to access health care, sometimes for the first time. 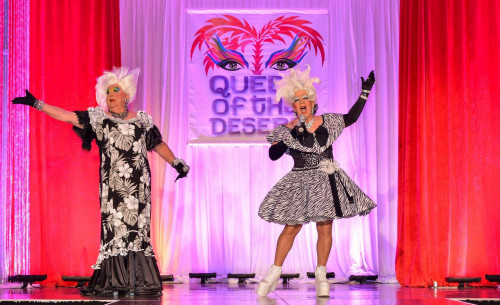 “We were the drag queens for people who don’t like drag queens,” says Woodmansee. “We won them over with lots of comedy, artful costuming and always affordable ways to pitch in and help people with HIV.”

Whether in a bar asking for small change or in a convention center with celebrities asking for big bucks, Les Dames du Soleil spent decades engaging—and delighting—a loyal fan base.

“Les Dames du Soleil had a valuable purpose,” says Woodmansee. “People wanted something to believe in—to enjoy, to laugh at and to cry over. Our shows struck at the heart of the community, which we realized was an extremely generous and caring one,” he says. “We kept delivering to our fans, and our fans loved us for it.”

Prior to his work with Les Dames du Soleil, Woodmansee had volunteered at support groups for families who had lost loved ones to AIDS. Despite their grief, he found that many families still carried a lot of homophobia. Expressing it in therapy was part of their journey, but he knew he could not handle the toxicity. Then he saw the magic that was possible with a drag show, friends and fundraising.

Since 1994, Les Dames du Soleil has raised $2 million to help people living with HIV in the Coachella Valley access the care and services they deserve.

“Les Dames du Soleil gave the audience an avenue to donate money,” says Woodmansee. “And we gave them a quite a show in return.”

That support was essential, given the lack of funding for health care, especially for people living with HIV.

“We struggled along on nickels and dimes constantly,” says Ron Christenson, DAP’s founding treasurer. “Half the time we didn’t have the money to pay the rent—it was really hard.” 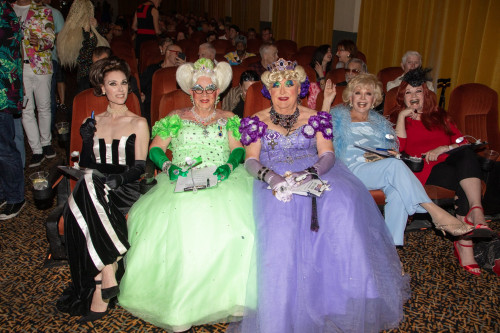 When Les Dames first started, they charged $3 admission at bars. Eventually, when they started playing the ballrooms and larger venues, prices went up to $25.

“I wouldn’t let them go any higher because Les Dames du Soleil was founded on the premise that we wanted to include everyone,” says Pearcy, “and we wanted everyone in the community to feel part of the community.”

The new Les Dames du Soleil Wellness Space serves as a waiting area for acupuncture, reiki and massage appointments as well as group meetings. It’s also where the DAP Health computer lab is located, which many clients use for job searches.

Volunteering his time and expertise for this project came naturally for Beau Stinnette, of Foley & Stinnette Interior Design. Maude and Dottie, played by Woodmansee and Pearcy, were part of Stinnette’s memories from his early Palm Springs days, and he knew about the impact they were making on the DAP community.

As if with a cosmic wink, even the shade of red Stinnette selected for the room added a layer of HIV awareness.