POZ asked readers: How did HIV change your life? A long-term survivor shares his story of profound loss and immense gratitude.

In 1991, I found myself on the first day of a new job with a temperature of 102 degrees Fahrenheit. That morning, I ended up in two different emergency rooms. The first E.R. couldn’t figure out what was wrong, so they sent me to a larger hospital two hours away.

At the second E.R. I was asked a few questions. Had I done anything unusual in the last few weeks? Had I ever been tested for HIV? I told them no and that I would consent to the test. I also let them know that I did have a condomless sexual encounter.

As I waited, I began thinking about the possibility of having AIDS. I blamed myself. Eventually it was determined that I had a bacterial pneumonia. I was shocked, embarrassed and scared to death. It was a few long difficult weeks until I returned to get my results. I tested HIV positive.

I was devastated and afraid of what my partner would think. Soon after my diagnosis, my partner was tested, and he also was HIV positive. While at the hospital we were convinced that applying for disability benefits was our best option. Fearfully we agreed and started the process.

I must admit that fear, anger and denial also caused us to take a few more years before we made some lifestyle choices to improve our lives.

In 1994, I received a frantic call from my father. He told me that something was wrong with Michael, my older brother by 10 years. My parents and I decided to see what was wrong.

I remember my brother answering the door naked and then returning to a sofa bed where his partner laid asleep. Michael wasn’t himself. He was childlike and his partner Arnold had lesions on his face.

They both had AIDS-related illnesses. My brother had wasting syndrome and AIDS-related dementia. Arnold was diagnosed with Kaposi sarcoma (KS). I remember the term “full-blown AIDS” being used at that time. I hate that term.

My brother and Arnold were both intelligent, talented and full of life. Now they were fragile, gaunt and afraid. My mother and father both asked if I would consider moving to San Diego to care for my brother. I did without hesitation.

I managed Michael’s health care as best I could. It was hard because he was in deep denial. Most times he did not take his HIV or dementia medications. This caused fights between us. I felt as though I was fighting with a child. 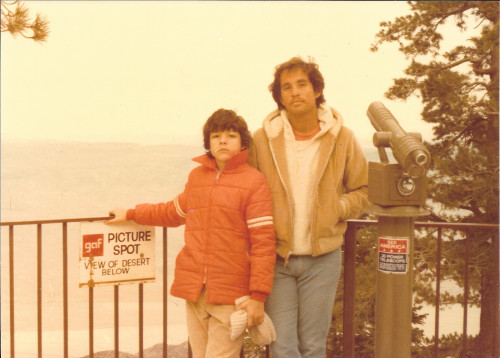 Just before Christmas of 1994, it was obvious to me that my brother Michael was no longer able to care for himself or his partner whose KS was taking his right eye. One morning when Michael came to take me to work, I sat him down. I asked him if he was aware of his HIV status, if he realized that he had AIDS. His response was “Really? I have AIDS?” Yes Michael, I said, and we need to talk about what is best for you and Arnold.

I said to Michael that I know how much you love Arnold and that you only want to do what’s best for him. I said Arnold needed more care, which he couldn’t give him anymore. I told him that Arnold needed skilled nursing now. Michael was devastated by this reality and we both cried for a long time. Michael then agreed and now he just had to tell Arnold. They were both broken-hearted that Christmas.

Soon after that, Patrick, my now husband of 33 years, and I moved in with my brother. This proved to be difficult. I felt like I was watching a reflection of what could be in store for my husband and myself. I spent a total of eight months caring for him before my big brother died, followed by two of their close friends and lastly Arnold, my brother’s partner of 15 years.

This experience changed everything. My husband and I reevaluated our lives. We became closer and more in love. Because of this experience, I didn’t want to die anymore. I was determined to live.

A year after my brother passed, I witnessed my father having a fatal stroke and ended up moving in with my grieving mother. In 1996, my T-cells were just 76 and I got Cryptosporidium, an opportunistic infection. With those two things I now had an AIDS diagnosis. Denial was not an option for me anymore. I was ready to fight.

I spoke to my doctor. We decided to treat the crypto and I begin a new medicine, the first protease inhibitor. In a couple of months, the crypto cleared up and my T-cells jumped back over 200. The protease inhibitors had side effects and within two years of use I developed necrosis of the hip. After a failed bone graft, I had a hip replacement and got back to walking.

Because of this experience, I didn’t want to die anymore. I was determined to live.

Eventually, it was clear that we were not dying and that the new classes of HIV drugs were working. Patrick and I decided that we needed to do something besides being on disability, so we went back to college. After a bit, we could see that school would take a while to complete with a job search on top of that. We both didn’t want to wait that long to start back in the work force, so he became a truck driver.

As a driver, Patrick had medical and prescription coverage, but the job wasn’t perfect. I didn’t get to see him much since we still lived in California, but his runs took him from Texas to Pennsylvania to throughout the Midwest.

Eventually, he asked if I wanted to move to Indiana to his childhood home. Soon we moved and fortune was with us because we did something we thought we’d never do—we bought a house on contract.

I was so proud. I would run around saying “I’m a homeowner!” Five years later, my mother died. My hope is that she saw us growing and living. I hope it gave her some peace of mind. Watching my mother suffer after all our family losses was so very hard.

It’s now just my husband and myself. I still have physical challenges to overcome, like vascular disease that almost took my foot. Even with all of these struggles, I still wanted more.

I found a program for vocational rehabilitation. They helped me with how to decide how much I was able to work, to write a resume and to get job coaching. I had almost completed the program when my right femur broke. I stopped the program, but as soon as I was better I started looking for work again.

While sitting at the computers at my local library, I opened Facebook. I saw a job for two days a week at our local HIV/AIDS nonprofit organization as a front desk person. I interviewed for the position and got it. Over four years later I’m still working at that job, which means a great deal to me.

I thank all who have helped me through my journey. I look forward to sitting at the front desk for many more years talking and listening to clients and helping staff.

In 2020, Patrick and I celebrate 34 years together. I’m so grateful. I’ll end with a line from the sci-fi movie Galaxy Quest that Pat and I live by: “Never surrender, never give up!”