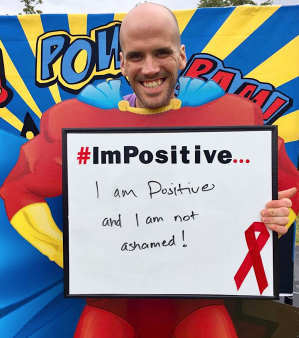 Check out these fun and inspiring posts. As one participant says: “Lots of people really need things like this campaign.”

In one of his social media posts, Dustin Thompson appears in the guise of a superhero, which is appropriate because he’s also fearlessly holding a whiteboard that reads “#ImPositive… I am positive and I am not ashamed!”

Thompson is just one of the participants in the #ImPositive social media campaign started this summer by AIDS Services Foundation of Orange County, an HIV nonprofit in Irvine, California. The goal of the campaign is to fight HIV stigma by sharing images and stories of people in Southern California living with HIV, reports The Orange County Register.

“When you’re talking about stigma, that can potentially cause a delay in acting,” Tamarra Jones, who oversees HIV prevention for the Orange County Health Care Agency, told the newspaper. “That means later to test, later to identify that you’re positive, and later to get into care. Once in care, you may fall out of care more easily because you don’t want people to know what’s going on in your life.”

Thompson said that when he tested positive 10 years ago, he was ashamed to tell his mother, but when he did, she was supportive. “I’ve never known what it’s like to not be loved and supported and accepted for everything about me,” Thompson told The Orange County Register. “It’s easy to forget that not everybody has that support. There are lots of people that really need things like this.”

Renee Austin of Huntington Beach said that after she disclosed to a coworker she considered a friend, the coworker said she’d rather quit than be around her. It was a low point in Austin’s HIV journey, but today she sees the importance of being open about her status. “I have to believe that what I’m doing could help save someone’s life,” she said, “or I wouldn’t risk doing this.”

Below are samples of the #ImPositive campaign as they appear on Instagram.

Daniel is positive that sharing your status with your partner is absolutely necessary. Join the movement and share your #ImPositive with us today! @LilMesican

Josie Lopez is positive that she is supporting our community! Share your #ImPositive with us today! #ASF #OC

Dr. Gary Brewer of @CareMedsPharmacy is positive that we can achieve quality of life! Join the #ImPositive team by showing us what makes you positive! #ASF #OC

@thatboyDUSTIN is positive and NOT ashamed! Share your support for Dustin and others affected by HIV/AIDS and share your #ImPositive with us! #ASF #OC