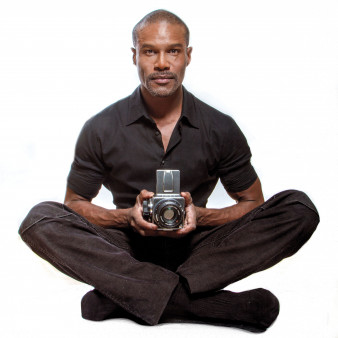 Photographer and activist Duane Cramer aims to help reduce stigma and increase healing through his art.

Duane Cramer has photographed a who’s who over the years of politicians, actors and other celebrities. In that time, he’s also been able to apply his photography skills to several social marketing campaigns, allowing him to combine his art with his activism, which he calls “artivism.”

His passion for artivism is deep-seated. Cramer lost his father to AIDS in 1986. Joe Cramer had a PhD in accounting and was an associate dean at Howard University, but HIV stigma led Duane and his family to initially tell people Joe died of cancer. In 1996, Duane tested HIV positive.

Losing his father to AIDS and living with HIV have made Cramer especially dedicated to pursuing his passions and sharing them with the world. As a result, he has served in many related activist roles, including as a spokesperson for “I Design,” an HIV/AIDS awareness campaign sponsored by Merck.

Here, Cramer reflects on his personal and professional experiences as he shares his thoughts on how art enhances wellness, how artivism fights stigma and how aging with the virus expands his appreciation of life.

When did you develop an interest in photography?
When I was very young. I grew up in a family of a lot of artists. There were photographs everywhere of my ancestors dating back to the early 1800s. I developed a kind of intense love of these images. My family impressed upon me the importance of documenting lives. Photography is the way to document that we were here.

My family also impressed upon me the value of education. I have a business degree from the University of Southern California, but I did not study photography formally. I worked at Xerox Corporation in sales and marketing for almost two decades, but I was also taking photographs. I’d been doing photography since high school.

I also got into activism at Xerox by heading up its community involvement project, sponsoring different causes like breast cancer or AIDS Walks. The company eventually awarded me a full year paid social service leave of absence. It’s an honor granted to just a few people every year, which the company has been doing for years.

For that year, I worked with the AIDS Memorial Quilt, taking it to middle schools and high schools around the country with a focus on black and Latino populations. The quilt is the largest grassroots art project in the world. I was on the board of directors. I made a panel for my father that includes a photograph of him.

I went back to Xerox for a few years, but I soon realized that I had to leave to pursue my artistic passions. Becoming HIV positive made me realize how precious life really is, and how precious each person is. It made me focus on how could I make the biggest impact, which for me is taking photographs that cause people to take action.

What does “artivism” mean to you?
For me, artivism is where an art form also has the ability to create a lot of buzz, energy, possibly controversy, positive action—a call to action, really. So, for example, let’s take a campaign like “Testing Makes Us Stronger,” the first campaign by the Centers for Disease Control and Prevention (CDC) targeting black gay men to get tested for HIV.

That campaign uses beautiful art with a variety of people with different looks, sizes and colors, as well as different representations of masculinity and femininity. Doing that can create dialog and stir up emotions, both positive and negative. We’re going for a visceral reaction from people to cause them to act, using art to do more than entertain.

Many of the campaigns that I’ve been involved with are pretty edgy. It’s important to create that kind of buzz, particularly in social marketing campaigns, because generally the budgets aren’t that high, so you’ve got to figure out a way to get more press attention. Artivism is one way to get that done.

How can art fight stigma?
First, creating art strengthens the creator of the art. It helps put some starch in their back. It helps them create something that they’re going to share to make an impact on other people, which fights stigma. Art gives life to people. It gave me purpose. I can always go back to that feeling.

Second, art itself is healing. In the past, I used to spend my time doing things that weren’t as productive or meaningful. After I became HIV positive, I realized that art could be therapeutic for me. It’s a channel for me to focus this powerful energy in a positive way, which helps me fight stigma.

You’re a long-term survivor. What has that taught you about aging with HIV?
Being over 50 years old, I definitely fall into the current demographics of the disease. More than half of the people living with HIV in the United States in 2015 are over 50 years old. So, you’ve got to take a look at how aging is affecting our population. Particularly, you’ve got to address long-term survivors.

I’ve found in doing my work and talking to people that so many long-term survivors have become fatigued; some of them have stopped taking their meds completely because they’re just sick of it, and in a very short period of time, some of them aren’t here with us anymore. Thankfully, there are increasingly more support groups popping up around the country.

In San Francisco, where I live, one example is Let’s Kick ASS [AIDS Survivor Syndrome], which facilitates people getting together to talk about these issues. I guess the silver lining in all this is that there is an aging HIV-positive population figuring out ways to age gracefully and healthfully.

Tell us about your upcoming projects.
In addition to my ongoing work as a freelance photographer for various projects, I’m continuing as a spokesperson for “I Design,” which seeks to empower people living with HIV/AIDS to tailor their treatment plans.

The campaign also includes Mondo Guerra of Project Runway and music promoter Maria Davis as spokespeople. It offers a conversation checklist for you and your doctor, as well as desktop and mobile apps to track your health.

I’m also continuing my work with the “Testing Makes Us Stronger” campaign from the CDC. We’re releasing a new series of images for the campaign. We’ll be going to various black gay pride events nationwide to do outreach and photo shoots. There also will be a social media component. It’s always exciting to get people engaged.

Also connected to “Testing Makes Us Stronger,” we’ve completed a related public service announcement directed by [Noah’s Arc creator] Patrik-Ian Polk. I was director of still photography. We photographed some of the women from Real Housewives of Atlanta for the PSA, which should come out this year.

What excites you about photography?
Every single picture that I take of every person, I want that to be the absolutely best image of that person. I want them to feel amazing when they see it; I want other people to look at it and go, “Wow, they look good—they look like they’re moving in the right direction!” That attitude can rub off on other people.

There’s a big trickle-down effect as to the positive and healing aspects of what art can do. That’s why it’s so great there are so many different creative people who can appeal to different people in different ways.

Creating art for awareness campaigns requires a lot of thought to work with subjects to create something that’s going to be powerful. I always tell people, I can’t do anything on my own. I appreciate people saying nice things about my work, but it’s a collaboration.