Add this to the reasons to resolve to eat better and move more in the New Year: A study published in Research in Nursing & Health found that people aging with HIV walked about half as much as their HIV-negative counterparts.

Christine Horvat Davey, PhD, RN, a postdoctoral fellow at Case Western Reserve University, and colleagues analyzed data from the Impact of Perceived Cardiovascular Risk and HIV on Cardiovascular Disease Behaviors study, which looked at the exercise, diet and strength training efforts of people living with HIV. The goal was to assess people’s behavior based on their perceived risk of heart disease.

The study followed 105 people with HIV and 86 people without HIV. A majority of the participants (85%) were Black, and the median age was 55. However, men made up a greater proportion of those in the HIV-positive group (68%), compared with the HIV-negative group (47%).

People with and without HIV consumed about the same amount of sugar-sweetened beverages, carbs and alcohol a day, and both groups scored about the same for healthy eating. People living with HIV also had about the same level of muscle strength as their HIV-negative peers. However, people with HIV consumed more fiber but took fewer steps in a day than their peers without HIV. HIV-negative people took an average of 7,080 steps per day, while HIV-positive people took about 5,450—a difference of 1,630 steps.

The good news is that fewer steps didn’t seem to translate into higher rates of pain, fatigue, anxiety, depression or trouble sleeping, all of which remained similar between the two groups. For everyone, the healthier their diet, the more fiber they ate and the more they toned their muscles, the better they were able to get up and move around and otherwise physically function.

But when the researchers looked at associations between behavior and outcomes among HIV-positive people, they found a difference between people aging with HIV and those without. The more steps a day people with HIV took, the more tired they were. People without HIV, meanwhile, experienced the opposite.

Horvat Davey and colleagues suggested that one thing could explain the paradox.

“Because people in our sample had approximately 50% fewer steps than the recommended daily steps of 10,000, their fatigue may be attributed to general decreased physical fitness patterns,” they wrote.

Click here to learn more about healthy aging for people with HIV and HIV and exercise. 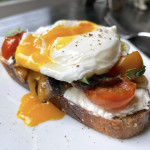 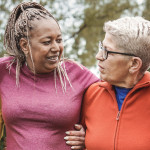