I’m a big fan of the singing competition The Voice on NBC. It got in my veins after season 2 semifinalist Jamar Rogers disclosed his HIV-positive status on the show. Up to then, I was an American Idol guy, so the switch took some time.

Apart from the talent of the contestants and the witty banter among the judges, what got me hooked were the blind auditions. The judges sit with their backs to the performers. Only after they hit their buttons can the judges turn around, see the face with the voice and then persuade the performers to pick them as a coach.

The idea of vocal talent alone being the first barrier feels right to me—and I’m not the only one. The Voice is the top-rated reality show on TV and won the 2013 Emmy for Outstanding Reality-Competition Program.

Until the judges turn around, most of the performers are unsung heroes of a sort. On the show, some of them get to tell their stories of struggling to make their dreams of being a professional singer come true. For many, just auditioning is a triumph.

This year’s POZ 100 special issue has much in common with The Voice. We spotlight HIV-positive unsung heroes—people making a difference, but who’ve not gotten the widespread recognition they deserve.

Although their contributions certainly merit the attention, we by no means present these 100 people as the only ones deserving recognition. They are stand-ins for all the unsung heroes in our HIV/AIDS community.  Click here to read their stories.

In the spirit of the topic, members of the United States People Living with HIV Caucus got together to discuss how networks of HIV-positive people support self-empowerment. Click here to read an edited transcript.

December 1 is World AIDS Day. To mark this annual awareness day, click here to read our Q&A with Dylan Mohan Gray, the director of Fire in the Blood, which warns advocates that the global fight for access to low-cost drugs isn’t over. Then click here to read about Florence Ngobeni-Allen of South Africa. Despite being HIV positive, she is the proud mother of two HIV-negative sons. 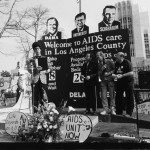