Despite mixed reviews since debuting Thursday, September 8, on the LGBT cable network Logo, the gay dating competition Finding Prince Charming has stirred the passions of more than 3 million viewers.

The show’s audience combined with the over 8 million viewers for RuPaul’s Drag Race All Stars made September 29 the highest-rated Thursday in Logo’s history, according to Deadline Hollywood.

So it’s no surprise that Finding Prince Charming continues to ride the rising wave of interest by upping the stakes tonight and revealing the identity of the suitor living with HIV, a topic first discussed in August.

Back then, both “Prince Charming” himself, Robert Sepulveda Jr., and host Lance Bass confirmed on People Now that the show would have an HIV-positive suitor, but neither gave his identity.

In advance of tonight’s reveal, please meet the suitor living with HIV: Eric Leonardos, a fan favorite (a.k.a. “Hot Eric With the Amazing Smile,” according to Kevin Fallon of The Daily Beast).

In this exclusive POZ Q&A, the 35-year-old West Hollywood hairstylist and makeup artist shares his experience living with HIV for 10 years and what motivated him to publicly disclose his status. 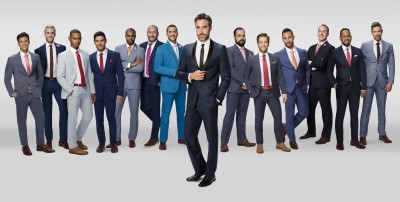 The cast of “Finding Prince Charming”Courtesy of Logo

Tell us about testing HIV positive.

It was a wake-up call. I found out about two months before my 25th birthday. It was scary. Luckily, I had a good friend who had been living with HIV for almost 10 years before I tested positive.

I was able to go to him for advice, but I still had questions regarding treatment and things like that. I went online to do research, I went on this crazy health kick for a while, and I saw a therapist.

My doctor recommended that I wait to start treatment. This was still at a time when they weren’t recommending people who were newly diagnosed to immediately get on treatment, which they do now.

Even though I wasn’t yet on treatment, I still had medical expenses from doctor visits and blood work. My health care insurance at the time wasn’t covering those expenses, so I struggled with paying.

I went to another doctor for a second opinion. She did an amazing job walking me through things. She got me into an HIV study, so that’s when I started treatment. I’ve successfully been on treatment ever since.

How did you disclose to your family and friends?

I grew up in a very conservative Southern Baptist family in Houston, but when I tested HIV positive, I was living in Austin, Texas. I was scared to death to talk about it with anyone. I didn’t tell my parents.

I eventually told one friend who then told another friend without my permission, which resulted in me keeping my HIV-positive status to myself for a long while because I was afraid of being treated differently.

It was difficult to come out to my parents as being gay but especially so to come out to them and my two younger brothers as being HIV positive. They’re all now aware of my status and are supportive.

About a year after finding out that I was HIV positive, I moved to Los Angeles. I started meeting people who were more open about their status and comfortable about the way they lived their lives.

Meeting people inside the HIV community gave me the space to get comfortable with being positive and disclosing. As new information about HIV came out, I kept learning that I could live a full life.

How did you decide to disclose on the show?

At the beginning of this year, I made a commitment to myself to say yes to all the things that scared me. So it was only earlier this year that I finally disclosed to my family that I’m living with HIV.

In that spirit, when I was approached to be in the show I said yes. Since the show just fell into my lap, I went through the interview process being open with the producers about being HIV positive.

I realized that since this was a dating show that I’d have to talk about being HIV positive, especially if I developed feelings for this person. If that happened, then of course HIV would naturally come up.

At the moment that I disclosed to [“Prince Charming”] Robert, I felt very supported. From the other suitors, from the production staff and from Logo, I felt much support from everybody involved.

No matter how it looks when the episode airs, I feel like I was given a really great opportunity to open up about living with the virus in a positive way and in a way that I felt was appropriate.

Do you have any advice about disclosure?

There are times when it’s necessary to disclose your status. For example, I believe that before you’re going to engage with people sexually you definitely need to have that conversation with them.

However, I also believe that people should only share their status when they feel comfortable in doing so. To get to that place, a good starting point is confronting feelings of guilt and shame around having HIV.

It’s a process for everyone, and the process is a unique experience for each of us. There’s a lot of anger sometimes, as well as sadness and depression. Wrapping your arms around those feelings can be helpful.

The more people can become comfortable telling a few people, the easier it becomes to disclose even further. The more people are able to share their status, the closer we get to reducing HIV stigma.

What have you learned living with the virus?

The two areas in my life where I felt a lot of guilt and shame were being in the closet as a gay man and finding out that I have HIV. Those areas are now where I feel the most freedom in my life.

Testing HIV positive gave me a wider view of the world and broader experiences in my life. As a result, along the way I’ve listened to the LGBT and HIV communities, learning about our needs.

Understanding more about our needs is what pushes me to become more of an activist and to bring awareness to those needs. We all deserve equality, but we also deserve love and happiness.

Disclosing my HIV-positive status on the show was a cathartic moment for me. I feel like an enormous weight has been lifted off me, because I did wait so long to tell my parents and others.

I feel like it’s my job now to be of service, to be a voice. I want to bring awareness to HIV to reduce stigma, to help people get better access to treatment and to prevention, and to educate people on prevention.

Tune in to Logo tonight at 9 P.M. Eastern time (8 P.M. Central time) to watch what happens when Eric discloses his HIV-positive status to Robert.

Click here to read the Q&A with Eric on People.com about his HIV disclosure.