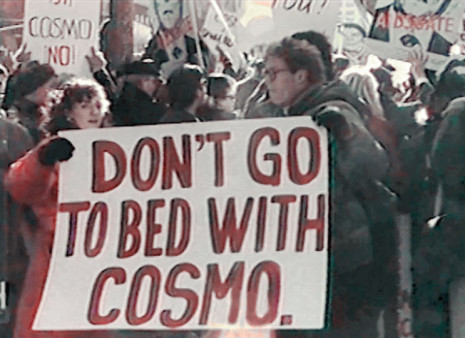 The Women’s Caucus of ACT UP New York stages its first protest. Vimeo/“Doctors, Liars and Women: AIDS Activists Say No to Cosmo”

15 – The Women’s Caucus of ACT UP New York stages its first protest. It targets a Cosmopolitan magazine article by Robert E. Gould, MD, that claims women are not at risk for HIV. (1988)

A poster for “Larry Kramer in Love & Anger”HBO

23 – The documentary Larry Kramer in Love & Anger premieres at the Sundance Film Festival. In June, it airs on HBO. (2015)

26 – President Barack Obama announces that Jeffrey Crowley will be the director of the Office of National AIDS Policy to coordinate efforts to address the ongoing AIDS crisis. (2009)

29 – Wilhemina’s War premieres on PBS. The documentary follows Wilhemina Dixon, an African-American woman in South Carolina who helps her granddaughter face the struggles of living with HIV. (2016)