Excluded From the U.N. AIDS Meeting? Hold Your Own Forum.

Why LGBT people, sex workers and injection drug users must be part of the discussion on ending AIDS.

Groups excluded from the United Nations’ High-Level Meeting on Ending AIDS held a side event just down the street from U.N. headquarters in New York City. About 200 people attended the forum Tuesday, June 7, the day before the three-day U.N. gathering. Leading up to and throughout the week, many AIDS groups have spoken out against the exclusion from the U.N.’s meeting and its accompanying declaration on ending the epidemic.

Cameroon, Russia, Tanzania and 51 Muslim countries prevented 22 organizations—representing LGBT groups, sex workers, injection drug users and men who have sex with men—from participating in the U.N.’s meeting, subsequently taking away the voices of the groups at high risk for HIV.

According to U.N. regulations, countries are allowed to exclude non-U.N. organizations from meetings, and reasons are not required. This gives countries the power to ignore, and silence, the groups whose beliefs they don’t agree with.

“Politics shapes what we know and who we see and how we see them,” said Meg Davis, of New York University’s Center for Human Rights and Global Justice, during her keynote address at the forum, held at the Ford Foundation.

“Civil society should be the ones validating the U.N., and the U.N. really needs us to validate them,” George Ayala, executive director of Men Who Have Sex With Men Global Forum, told the crowd. “So we really have to shake that idea that we need a political declaration or that we need [the] United Nations to validate what we know needs to happen.”

Five representatives of excluded groups discussed the difficulties their communities face—information they want to relay to the United Nations—and expressed their frustrations at being excluded from the high-level meeting. 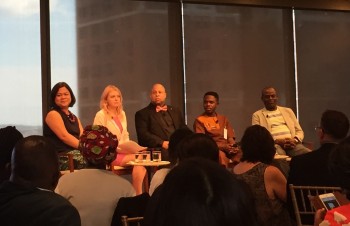 “While discriminating against the LGBT community, our decision makers put lesbian, gay and transgender people [as well as those] who use drugs into the further risk of acquiring HIV, which is fueled by their self-discrimination,” Mogucheva said. “So it is essential that member states must commit to incorporating human rights, public health and harm reduction principles in their drug policies, as well as allocate sufficient funding for harm reduction interventions, including needle and syringe programs.”

Halfway through the panel discussion, U.N. General Assembly President Mogens Lykketoft made an unscheduled appearance to express his approval of the work the activists were doing.

During the event’s audience discussion period, many participants praised the

accomplishments of the forum but urged activists to be relentless in their fight against AIDS.

As Ayala said: “The political spectacle that’s occurring here in New York doesn’t change the realities on the ground, at country level and in our communities. There are still 20 million people around the world still in need of treatment. And there are more than 2 million HIV infections every year, and that infection rate hasn’t really budged. It hasn’t budged in the last five years, and there are reasons why. Who do you think are among folks who are getting infected? And who do you think are among the folks who still need treatment? We have to keep that at the center of the conversations as we move forward in our strategizing.”

The forum was followed by a march from the Ford Foundation to the U.N. steps (see video below).