“Our Blood Is On Your Hands. Act to End AIDS” 2016 Health GAP protest outside of the United Nations Ted Kerr

Joining Health GAP today in protesting the exclusion of key populations from the United Nation’s High Level Meeting (HLM) on HIV, I was reminded of AIDS activist Keri Duran and others who were part of a four year campaign that worked to get the Centers for Disease Control and Prevention (CDC) to change the definition of “AIDS” to include women. 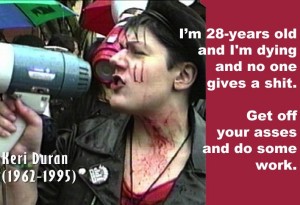 On December 3, 1990, in an intense downpour, activists from around the country gathered outside the CDC headquarters in Atlanta. Disrupting business as usual, with fake blood across her face and coming down her neck (an aesthetic similar to one that many of us sported outside the U.N. today), Duran got on the megaphone and yelled, “I’m 28 years old and I’m dying and no one gives a shit. Get off your asses and do some work.”

Then, as now, exclusion kills. Before the CDC changed the definition, women living with HIV like Duran were denied life-saving medication, housing and government support. They lost jobs, their children and the right to live.

Twenty-six years later, exclusion still kills. As the Global Forum on Men Who Have Sex with Men has reported, “Prior to HLM, conservative Members States rejected accreditation of several civil society organizations to attend the meeting for several organizations led by key populations, including gay men and other men who have sex with men, transgender people and people who use drugs.”

By failing to include organizations of drug users, sex workers, gay men and trans and gender non-conforming folks, this HLM is missing: an opportunity to hear life-saving strategies used on the front lines; key information about how deeply impacted populations achieve and maintain health; and insight to the resources needed to reduce the harm of HIV around the world.

At the June 7th forum, “The Impact of Civil Society Exclusion on Ending the AIDS Epidemic by 2030,” before the Housing Works march to the U.N. demanding inclusion, we heard how exclusion leads to both systemic and personal harms. Daria Mogucheva from the Eurasian Network of People Who Use Drugs spoke about how people living with HIV—and those made most at risk around the world—self-discriminate, selecting to not seek out possibly life-saving services.

Additionally, we see the results of the exclusion with the June 8th release of the Political Declaration coming from the HLM. It is a toothless document that does not address the life chances of key populations; fails to include specifics around political commitment and financial resources; and “woefully misses the mark in highlighting legal and policy frameworks that stigmatize and criminalize our communities worldwide,” states The Global Network of Sex Work Projects (NSWP), The Global Network of Trans Women and HIV (IRGT), Global Action for Trans Equality (GATE), and MSMGF (The Global Forum on MSM & HIV), and the Global Platform to Fast-Track the HIV and Human Rights Responses Among Gay and Bisexual Men and Other Men Who Have Sex with Men (The Platform).

Keri Duran died in 1995. According to lesbian activist Maxine Wolfe, Duran was a “fierce dyke AIDS activist” who worked especially hard to tell the world about the experience of AIDS on lesbians and drug users. The campaign to include women in the definition of HIV/AIDS was a collaboration between women in prison, and men and women on the outside from a variety of populations. The definition would not have changed if different members of civil society, activists, policy makers and others did not sit, fight and live together.

In thinking about the work that Duran and others did, what good are medical, political and cultural breakthroughs if progress can be so easily rolled back? If people most in need of services can be made to feel like their lives are not worth living? It is as sad to think that if she were alive today Duran would have been excluded from the HLM, as it is to think about all the amazing people who are alive today that are being left out.

To keep the conversation going and stay informed, here are suggested tweets and hastags as released by GATE, IRGT, MSMGF, NSWP and the Platform:

Theodore (ted) Kerr is a Canadian-born, Brooklyn-based writer and organizer whose work focuses on HIV/AIDS. He was in residence at the German Hygiene Museum for the AIDS: Based on a True Story exhibition. Kerr was the programs manager at Visual AIDS and is currently at Union Theological Seminary researching Christian Ethics and HIV/AIDS.