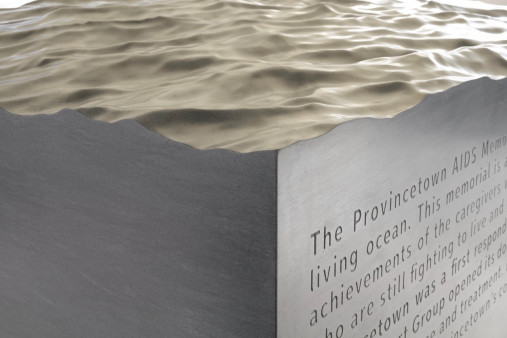 Created by Lauren Ewing, the horizontal monument in the Massachusetts resort town “stops one ocean moment in time.” [VIDEO]

This summer, visitors to the seaside haven of Provincetown, Massachusetts, have a new sight to see: an AIDS memorial. Created by sculptor and installation artist Lauren Ewing, who lives part-time in Provincetown, the memorial stands 3 feet tall and 9-by-9-feet square; it’s made of nearly 17 tons of carbon gray quartzite.

“It is a unique physical object that is polyvocal,” Ewing tells POZ, meaning that the memorial includes many voices and narratives. “It stops one ocean moment in time,” she says. “As a physical object it will endure even with sea level rise on this fragile peninsula.” 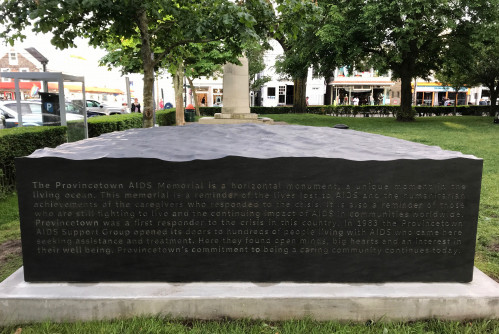 Provincetown, affectionately called Ptown, has been a favorite getaway for the LGBT community and artists since before the epidemic.

The memorial’s top resembles the surface of the ocean. Text is etched into the sculpture’s four sides. The word remembering is carved into two sides. Another side is carved with this text:

The Provincetown AIDS Memorial is a horizontal monument, a unique moment in the living ocean. The memorial is a reminder of the lives lost to AIDS and the humanitarian achievements of the caregivers who responded to the crisis. It is also a reminder of those who are still fighting to live and the continuing impact of AIDS in communities worldwide. Provincetown was a first responder to the crisis in this country. In 1983 the Provincetown AIDS Support Group opened its doors to hundreds of people living with AIDS who came here seeking assistance and treatment. Here they found open minds, big hearts and an interest in their well-being. Provincetown’s commitment to being a caring community continues today.

On the fourth side, lines from local poets combine to create this text:

Steve’s / holding Jerry, though he’s already gone, / Marie holding John, gone, Maggie holding / her John, gone, Carlos and Darren / holding another Michael, gone, and I’m holding Wally, who’s going. * Transcendence might be the term Emerson would lend it. / What I’m trying to say is that it wasn’t lonely. * Look: I am building absence / out of this room’s air * We are all made of / our own people laying names on the ground * Most of it happened without music, the click of the spoon from the kitchen, / someone talking, somebody sleeping / Someone watching somebody sleep.

The memorial was unveiled in June. You can watch that ceremony in the video above.

The Schoolhouse Gallery, which represents Ewing, includes this description of the memorial and artist on its website:

The Provincetown AIDS Memorial is located at Provincetown Town Hall on the lawn at the Ryder Street entrance. The Memorial will become part of the Town of Provincetown’s permanent art collection. The Memorial has been sculpted from 16.5 tons of carbon gray quartzite, a stone strong enough to stand up through the freezing and thawing of New England winters and constant salt air. The stone was sculpted in Tuscany with the aid of CNC robotic stone milling equipment and then finished by hand.

The top of the square 9-by-9-foot piece reflects the rippling sea surrounding Provincetown. “This is one of the most inspirational views,” says Ewing, looking out to Cape Cod Bay from the deck of her Commercial Street home. “It’s beautiful, powerful, threatening and soothing. People look out at the sea to clear their minds. There is awe. It’s about how deeply humans can feel. It’s appropriate for the sobriety of the monument.”

Her own relationship to the epidemic is as a gay American who watched people go through pain, fear and loss. “The prejudice was heartbreaking,” she explains. “What people did here when the rest of the world was freaking out—they offered an open heart before they thought of themselves. P’town cares about being a caring community.”

The memorial had been in the planning stages for more than 15 years. Ewing was chosen from a final group of 11 artists who submitted proposals.

Journalist Masha Gessen, who edited a gay Provincetown magazine, writes in The New Yorker that the Provincetown AIDS monument “is remarkable for what it omits. The phrase ‘open community’ subsumes the word ‘gay,’ and it also elides why people with AIDS came to Provincetown seeking help. They came because they had no place to go.… [It] leaves out the rage that fuelled the AIDS activist movement that played a key role in bringing about effective treatment. That omission, in turn, obscures the fact that, even now, proper care is fully available only to those whom the AIDS activist movement comprised and represented.”

In related POZ news items, to read about the AIDS Support Group of Cape Cod and the town nurse, Alice Foley, who founded the group, click here.