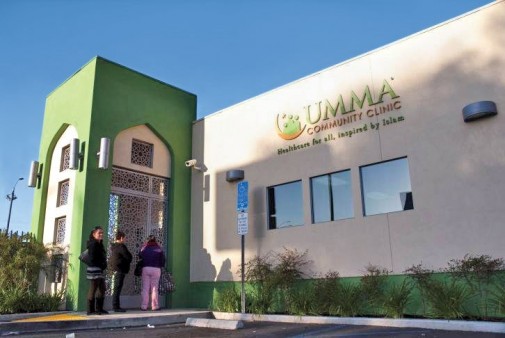 Miriam Y. Vega, PhD, is CEO of UMMA Community Clinic in South Los Angeles and an HIV researcher. Her previous leadership roles include executive director of AIDS Project of the East Bay, in Oakland, California, and vice president of the Latino Commission on AIDS, in New York City.

Vega, who earned her doctorate in social psychology from the University of California, Berkeley, is of Puerto Rican descent and was raised in the South Bronx, New York. Vega completed a prevention fellowship sponsored by the Centers for Disease Control and Prevention (CDC) at the State University of New York Downstate Medical Center.

In 2009, her HIV research led Vega to create the CHANGE (customized, holistic, analytical, network-building, grassroots and evaluatory) model of capacity building. In 2010, she and her colleagues launched SOMOS, an HIV prevention intervention for Latino gay men. In July, at the 21st International AIDS Conference in Durban, South Africa, she presented results from her latest study on HIV in the media. 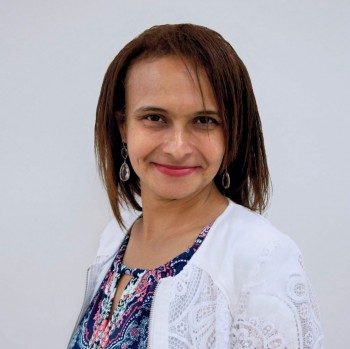 Miriam Vega, PhD is the CEO of UMMA Community ClinicCourtesy of Miriam Vega

Tell us about the UMMA Community Clinic.

We are a federally qualified health center [FQHC] marking our 20th anniversary this year. We provide primary care services for children and adults who have problems accessing care. [Named after the Arabic word for “the people,”] UMMA was founded by seven Muslim students from the University of California, Los Angeles.

They launched the clinic in response to the 1992 Rodney King uprising, so next year will be the 25th anniversary of that event, often referred to in the media as riots [which occurred after the acquittal of four police officers in the videotaped beating of King].

The students saw that people were hurting and needed basic health services, but didn’t have anywhere to go. They described their vision to Congresswoman Maxine Waters, who helped to get support from other officials.

We started as a free clinic serving everyone regardless of ability to pay. We still have that as part of our mission, but we also now have additional services, including HIV testing, thanks to partnering with other agencies.

As we grew, we developed a student health leadership program. That led to opening the Fremont Wellness Center at the local high school. Not only does it have primary care services, but it also provides behavioral health services.

As part of our 20th anniversary, we’re growing our behavioral health services using a trauma-informed approach. Many members of the local communities in South Los Angeles, specifically children, have gone through a lot of trauma.

Although we were founded by Muslim UCLA students, most of our patients are not Muslim. About 68 percent are Latinos. African Americans, of which many are Muslims, are the next largest group. 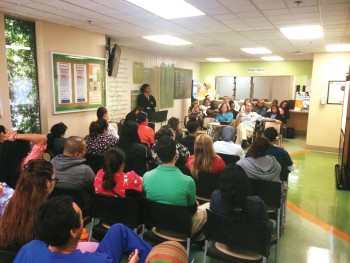 What’s the biggest difference regarding HIV between health centers and AIDS service organizations?

From my professional experiences, I believe that FQHCs still have trouble in general with seeing HIV as a primary care service. I hear lots of talk about HIV basically becoming all about biomedical interventions and that related services as a result are moving to primary care. However, I honestly don’t see that.

At our clinic, we provide services for all health issues. We don’t single out HIV, but the virus is included among all we do for sexually transmitted infections, including testing. Among our youth, for example, chlamydia is high.

As long as HIV stigma exists, we’ll continue to have AIDS service organizations [ASOs]. Having attended the 21st International AIDS Conference—hearing speaker after speaker talking about how stigma is one of the largest barriers to the goal of ending AIDS by 2030—we have to address that stigma head-on.

Tell us about the HIV research that you presented at the Durban conference.

Let’s back up a bit first. Two years ago, I did an oral presentation in Melbourne, Australia, at the International AIDS Conference, around how HIV is discussed on Twitter.

We did a sentiment analysis, which programmed an algorithm to detect emotions in a tweet. We looked at key emotions psychologists deem as basic.

The No. 1 emotion expressed in tweets around HIV was disgust—and this is over 30 years into the epidemic. We looked at tweets from before, during and after the 2012 International AIDS Conference in Washington, DC, so we reviewed over 100,000 tweets.

There was anger by activists at the state of the epidemic, but there was also anger by individuals blaming groups that were being mentioned in the neutral tweets. For example, data tweeted about how gay men in the South were affected by HIV led to people tweeting against gay men.

Based on that study, we did another study looking at how HIV, as well as Latinos, in the Deep South were portrayed in the media, which included newspapers, magazines and online. A lot of the coverage focused on who was to blame for a person getting HIV. It often focused on the criminalization of HIV, and it was often inflammatory.

That was the new data I presented in Durban. So when we’re working to put out information, we have to think about how some people will twist it. We need to have more training on HIV for journalists. We also need to train activists on how to discuss HIV with the media.

Are you continuing your HIV research?

Yes! My colleagues and I started this work while I was at the Latino Commisson on AIDS, but I’ll be doing more related research while at UMMA.

We’ve collected more tweets from before, during and after the conference in Durban, so we’re focusing again on social media because we’ve seen such an increasing desire in the HIV field to use social media.

We need to better understand how the dissemination of such information heightens emotions around HIV. Our goal in doing these research projects is to understand how stigma is rapidly diffused, if you want to think of it that way, by the click of a finger.

Further, we’ve included tweets about hepatitis and asthma, which are conditions that also have varying degrees of stigma, to see the related emotions.

How did you get into the HIV field?

The importance of public health was made clear to me early on. I grew up at the height of the crack epidemic in the South Bronx, so HIV/AIDS has always been in my life. I saw firsthand what the virus did to my community.

Getting my PhD in psychology at Berkeley, which has a very theory driven perspective, also allowed me to learn a more applied approach. Combining that with my CDC fellowship also prepared me to get into the HIV field.

I’ve always been interested in the communication aspects around HIV, how people talk about it, because when I was growing up it was hush-hush. People would whisper, “Look at that person—I think they may have HIV.” Hearing that kind of talk made me very uncomfortable, so I wanted to learn more about HIV to help the people I saw.

On a more personal level, my stepfather died about five years ago from AIDS-related illness, so fighting HIV is near and dear to me and my family. 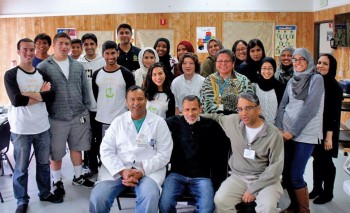 Volunteers at a UMMA community eventCourtesy of UMMA Community Clinic

What keeps you motivated to continue in the fight against HIV/AIDS?

We still have tens of thousands of new cases a year. We have to keep going at it until we hit zero. It’s not in me to get into something only to give up.

I did make a concerted effort, however, to move on to a new aspect of the fight, which is primary care. I want to see how we destigmatize HIV in the primary care setting. It’s my belief that if we can do that, then we may be able to finally decrease HIV incidence rates.

We still need ASOs, but primary care must include HIV.