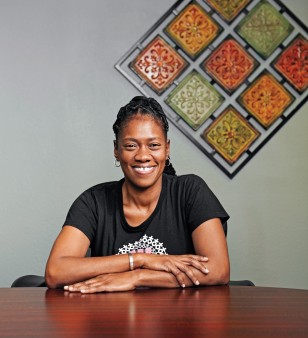 Talking to Gina Brown, you’d never believe she once didn’t know how to advocate for herself. Today, this funny, smart 49-year-old training coordinator for the New Orleans Regional AIDS Planning Council spends her days setting up programs to help other folks living with HIV do things like build résumés so they can get back to work. She’s also on the Presidential Advisory Council on HIV/AIDS, where she works on such issues as treatment for those coinfected with HIV and hepatitis C, and preventing HIV infection among young gay men of color, who have the highest rates of HIV in the country. Brown is also on the board of Positive Women’s Network (PWN-USA), which inspires, informs and mobilizes women living with HIV to advocate for changes that improve their lives.

If that wasn’t enough, Brown is also starting a mentoring and career-developing nonprofit called Build Your Dreams for girls and young women in the city’s economically challenged Lower Ninth Ward. “I want to start it because I see the social determinants that drive the HIV epidemic, like poverty, lack of education and crime rates, all the time,” says Brown, who since her 1994 HIV diagnosis has earned both her bachelor’s and her master’s in social work. “If I’d been exposed to mentorship as a young girl in New Orleans, it would have made a difference in my life.”

Obviously, Brown knows how to get what she needs. But it wasn’t always that way. In 1994, pregnant with her first child, she learned she was HIV positive. (She assumes she got the virus during a prior period as a crack user who traded sex for money or from the father of her two children, who she didn’t learn was HIV positive until after his death in 1997.) She got the news at the city’s Charity Hospital, which closed after Hurricane Katrina. “A nurse told me that I had AIDS and was going to die,” Brown recalls. “She was a nurse, so I thought, ‘She knows.’ I cried and cried and thought, ‘I’m gonna kill myself.’ I didn’t even know women could get HIV. I hadn’t heard about Mary Fisher or Elizabeth Glaser,” she says, referring to two prominent activists at the time who had gone public with their HIV status.

Yet in a way, Brown’s self-advocacy started at that very moment: by expressing what she felt in her heart. “I told another nurse that I was going to kill myself,” she recalls, “and she said, ‘No way,’ and called another nurse, who grabbed my hand. I snatched it away, saying, ‘I have AIDS!’ And she said, ‘You have HIV. We don’t know if you have AIDS until we measure your T cells. Do you want to come and talk?’ So she took me into a conference room and said, ‘If you do these three things, you’re going be fine: Attend all doctor appointments, take your medication exactly as prescribed and learn everything you can about this virus.’ I do those three things to this day and I’m still alive!”

That nurse, Margot Perrin, became a lifeline for Brown through her pregnancy, during which she took the drug AZT to prevent passing HIV to her child. “My self-esteem at the time was so low, so I latched on to Margot because she gave me hope,” Brown says. “I could call her with any question, no matter how stupid I thought it was. I thought I had to use gloves with my baby and she said no. She told me that my baby and I could bathe together. I didn’t even know how HIV was spread. I thought it was through all body fluids, like tears and sweat—not just blood, semen and breast milk.”

Slowly but surely, Brown was learning how to get information she needed—and to speak up for herself. When she returned to Charity to give birth, she was infuriated to see that hospital staffers were whispering over her chart in front of her. “They were saying, ‘What a waste,’ spreading the word on the ward that I had HIV, even to the housekeeper,” recalls Brown, anger still in her voice. “I was furious, and I told Margot everything. I didn’t even feel ashamed at that point. I thought, ‘This is how you treat me? How would they treat someone who didn’t speak up?’”

Brown’s vocal anger led to the hospital having a special training session where HIV experts brought the entire staff up to date about facts versus myths—and about patient confidentiality. “Someone said she couldn’t believe women would get pregnant after learning they had HIV,” Brown says, “and Margot told them that most women don’t even find out they have HIV until they’re pregnant.

“So,” she says, “that was the start of my advocacy career—and I didn’t even know!”

And it didn’t stop there. Brown was angry that the HIV clinic at the hospital would call out people’s full names in the waiting room, again compromising confidentiality. “In New Orleans, we don’t have six degrees of separation, we have one or two,” she explains. “It was so disrespectful.” She complained, and the clinic stopped using last names. Yet she also quickly got over the shame about her own HIV diagnosis. “People would hang out by the entrance to the clinic to see who was positive,” she recalls. “At first I wanted to die, but then I thought, the heck with them, and I’d be like, ‘Hey, how y’all doing!’ on my way in.”

Perhaps most importantly, Brown developed a strong and open relationship with Jeanne Dumestre, APRN, who would be her nurse practitioner for the next 13 years. “I’ve never been embarrassed to ask her anything,” Brown says. “A guy I was dating wanted to know if we could have oral sex safely, so I asked her and she said, ‘I’d tell you to use a dental dam, but I don’t think you’d enjoy it as much,’” laughs Brown. (Research has found that oral sex poses low to no risk of HIV transmission.) Brown says Dumestre was also the first provider who took into account the fact that Brown had been molested as a child—research backs up her belief that this later drove her to trade sex for drugs. During an OB-GYN exam, “she’d explain everything to me beforehand,” Brown says.

Dumestre also helped Brown kick her longtime smoking habit. “She said, ‘Your Kools will kill you before HIV does.’” With the aid of the smoking-cessation medication Chantix (varenicline), Brown was able to finally nix the butts in 2008.

Luckily, Brown has never had side effects with her HIV meds, which she has changed over the years as easier-to-take combos came out. But after quitting smoking, she started snacking compulsively and gained weight, which led to lower back pain as well as high blood pressure and high cholesterol. “I got addicted to Little Debbie snack cakes!” she says. So she joined an affordable gym with some girlfriends, started going three times a week and, eventually, dropped to 145 pounds and what she calls “a comfortable size 9.” (“I still love Doritos, though!” she says.)

Through all these years, Brown has learned the importance of not only educating herself about her health but also speaking up with her providers—including Mary Murphy, MD, who has been her primary-care doctor since 2007. Because of a family history of colon cancer, Brown asked Murphy for a colonoscopy a few years ago. “She told me I didn’t need it until age 50, but I told her that if I got colon cancer before that, I was going to hurt her,” laughs Brown. “So she gave it to me.”

Similarly, when Murphy recently wanted to change her HIV meds, Brown asked, “Why? My current meds are working fine. If it’s not broke, don’t even try to fix it.” So she stayed on the same meds.

The best thing about Brown’s self-advocacy? It’s given her the health and stability to simply enjoy the rest of her life like anyone else—and that’s a far cry from the scared woman who thought she was going to die back in 1994. She’s crazy about her two grandsons, Juan, 5, and Jajuan, 4. “We play basketball, watch cartoons, and cook and read together,” she says. “Our favorite book is The Velveteen Rabbit.”

On her own time, she devours books—most recently Stolen Women, a groundbreaking book about black women’s sexual health by Gail Wyatt, PhD, and the autobiography of Black Panther Assata Shakur. “I also love Stephen King!” she says. Plus, she’s got some major trips on her bucket list: as close as Puerto Rico but as far as Ethiopia—and Rome. “My daughter and I want to see the catacombs.”

We wager that they will. Gina Brown is a woman who knows how to get what she wants—and needs.